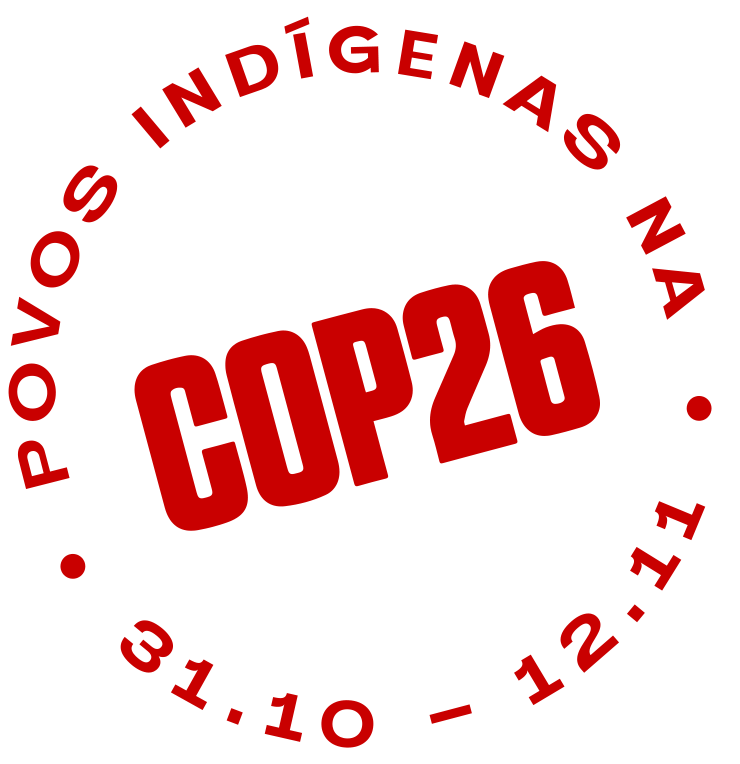 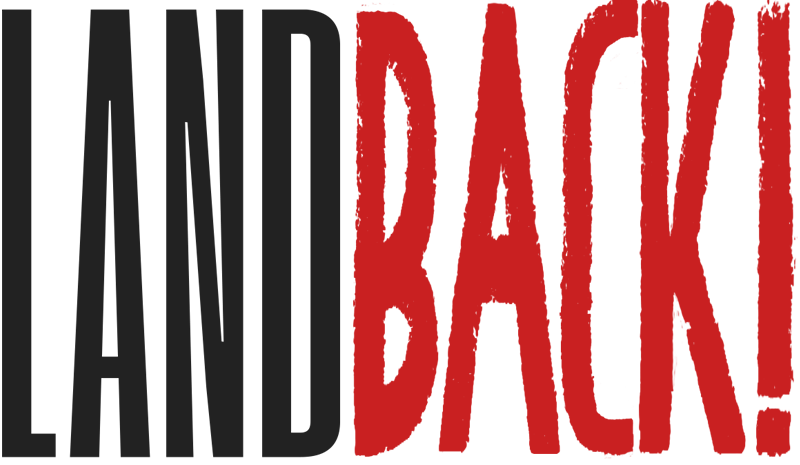 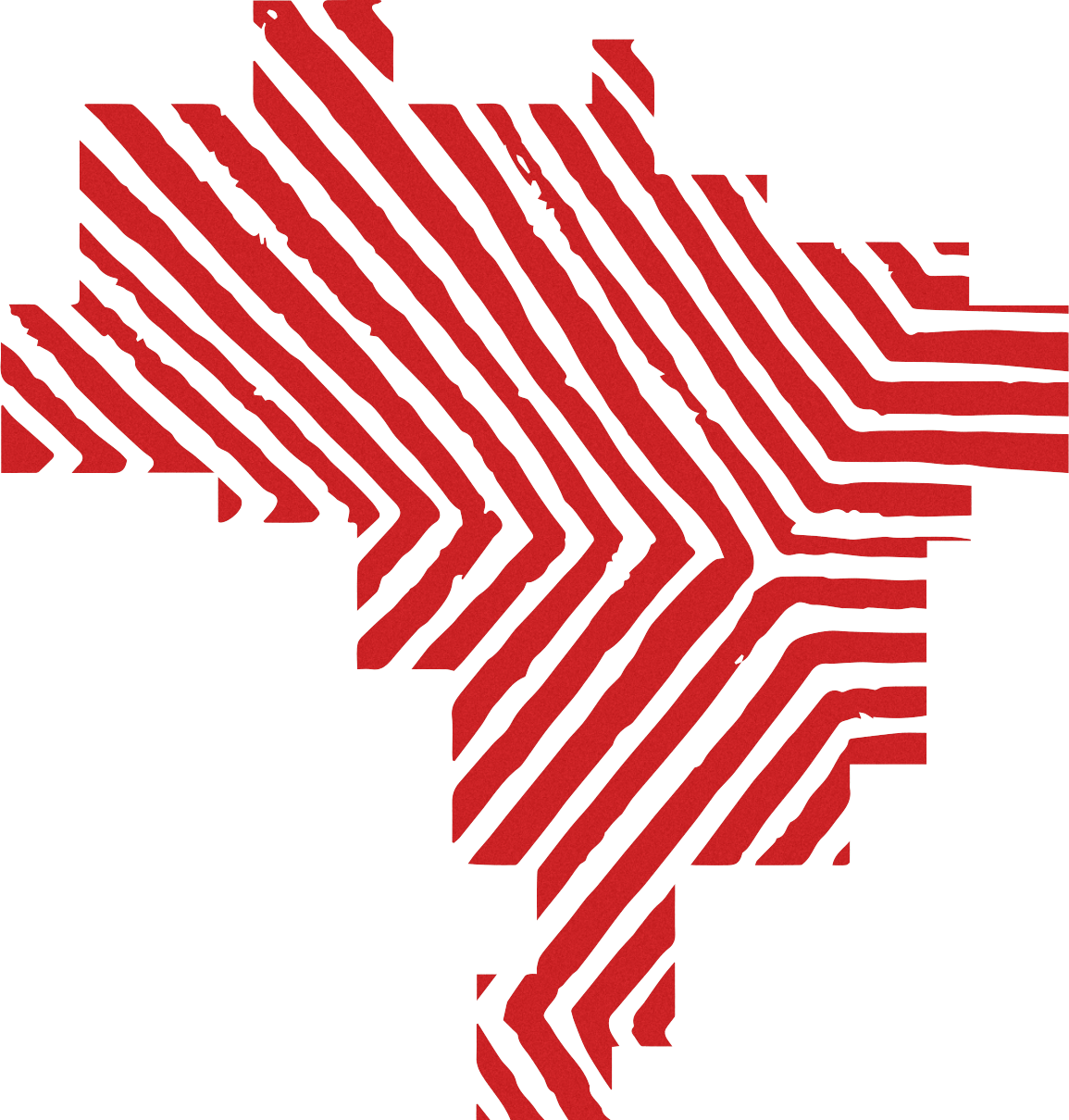 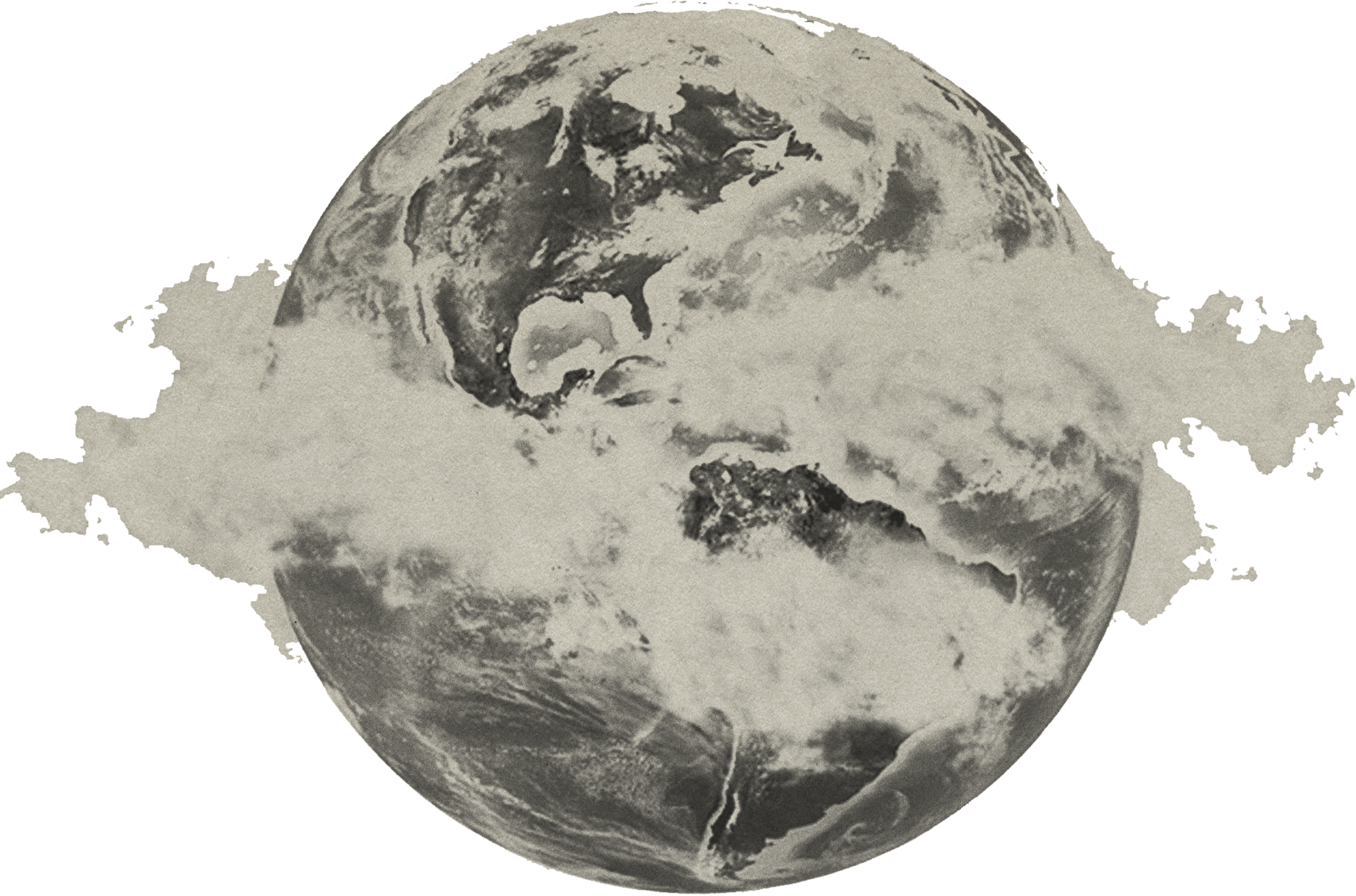 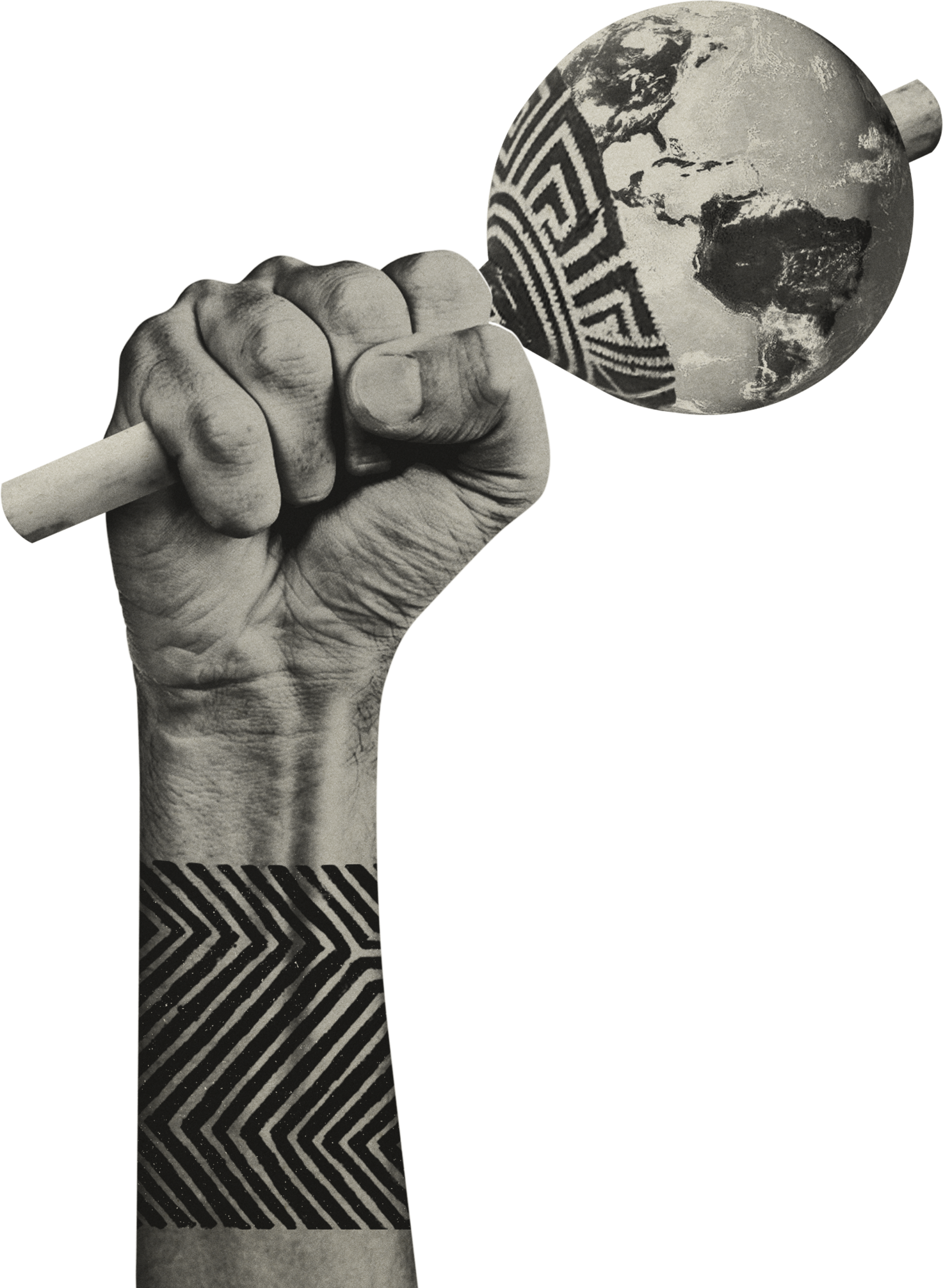 Climate change is more perceived by indigenous peoples because we have an intimate relationship with Mother Nature: all our sustenance comes from her and she gives us all the explanations for the phenomena that affect our lives. We understand her language. Looking at the sky, feeling the temperature, listening to the beat of the earth are things we learn from an early age, through indigenous education, which prepares us to manage the world, and brings meaning to life. But everywhere we go we have heard personal perceptions regarding the unbalance in the climate. Even in large urban centres many people are already noticing its effects on their daily lives.

The transformations are beginning to awaken everyone’s instincts. During the United Nations Climate Change Conference (COP26), we, from the Articulation of Indigenous Peoples of Brazil (Apib) will be reinforcing to the world the centrality of Indigenous Peoples and their Territories in confronting the climate crisis. We are watching governments and organizations seeking technological solutions and tools that can help the current crisis, but it is necessary to understand that the main social technology has already been developed by indigenous peoples: traditional territories and indigenous cultures.

In a context of many threats to indigenous peoples and territories, Apib will participate in COP26 to affirm to the world the centrality of the guarantee of demarcation and protection of Indigenous Lands in the fight against the climate crisis.

THERE IS NO SOLUTION WITHOUT US

On all continents, native peoples fight to protect their lands and guarantee the right to live to all species. Our struggle is for our lives and our territories, for the defence of the last ancestral lands and to confront the climate crisis on our planet. Our struggle is for the healing of the Earth. Therefore, we reiterate the urgency of the demarcation and land tenure rights of our territories.

Indigenous Land is a guarantee of the future for all humanity. Our relationship with territory is not one of ownership, exploitation, expropriation or appropriation, but one of respect and management of a common good, which serves all humanity as barricades to the extractive dynamics that cause the climate crisis. Until today – based on reports from the UN and several research institutes with the highest reputation that western science can demand – it is we, Indigenous Peoples, who are the most responsible for the preservation of the biomes of the planet.

Many of those who listen to us today are unaware of all the effort we put into this mission. We have shaped and protected our biomes at the price of the blood of millions of our relatives. The genocide of the native peoples, the persecution of the defenders of our territories and the illegal capture of our lands, is the greatest and most widespread crime that humanity has produced throughout its history. This is a continuing and present crime, which we denounce in all the instances we occupy.

It is fundamental that the world understands that there is no solution for the healing of Mother Earth that does not have its feet on the ground. Connecting with the earth, feeling its needs, understanding its cycles and its imbalances is fundamental to reverse the damage caused in recent centuries by the thirst for an irresponsible, unequal and ecocidal accumulation  and disposal behavior.

Indigenous Peoples and their Lands are the main Future Reservoir

Demarcation as a solution to the global climate crisis

Even being responsible for protecting most of the global forest heritage and, consequently, for the capacity to store more than 293 gigatonnes of carbon, one third of Indigenous and community lands in 64 countries are under threat due to the lack of land tenure rights.

Faced with a scenario where human impact reached, by 2016, almost 95% of the planet’s land surface, traditional territories are the last spaces where nature has its rights respected and where the climate balance is sought on a daily basis.

The failure of governments and states to recognize the collective rights of indigenous peoples over their lands turns these guardians into targets for attacks and atrocious violence, also promoting the illegal capture of their lands by exploitative dynamics of nature.

Brazil, originally an Indigenous Land, today reserves only 13.8% of the national territory for its original peoples. This portion of the national territory is the one that has been most preserved in the last 35 years, representing less than 1% of deforestation in Brazil in the same period. In addition to not meaning the entire extent of the forests protected by indigenous peoples – and which are with their demarcation process paralyzed – the already demarcated traditional territories are under strong legislative threat, in an unconstitutional attempt to deny the traditional presence of indigenous peoples in the country, and the occupation of their lands long before the formation of the Brazilian State.

Faced with the obvious and disastrous consequences of climate change, caused by the logic of accumulation and disposal and the erroneous perception that the earth can be exploited in an unlimited way, it is utopian to believe that capitalism and consumer society can be recreated, updated and reformed to continue consuming at the same pace, despite the limits of the destruction of nature.

Indigenous Peoples have witnessed climate change for a long time. They have seen their rivers dry up, the soil contaminated, fish die, their relatives become ill. Yet they have not lost touch with the human practice of using their resources wisely and creating solutions to ensure that all human needs are met, without preventing the needs of other species from being met as well.

Over generations, Indigenous Peoples have managed the biomes they inhabit in a process of millennial learning and daily reinvention. Observing, understanding, confronting and seeking strategies for the construction of a possible future is a speciality of the traditional peoples of Brazil, who have survived a policy of genocide for over 500 years.

In a debate clouded by technological innovations, online applications and complex financial systems, indigenous solutions are based on the origin of the problem: the imbalance in human relationship with the territory.

Over the years, Indigenous Peoples have improved their mechanisms to ensure the management and protection of their lands, such as the Plans for Territorial and Environmental Management of Indigenous Lands (PGTA). The PGTA is an instrument collectively constructed by Indigenous Peoples, in which they consolidate the desires and commitments to their territories and the wellbeing of current and future generations. Such an instrument in Brazil was recognized through the National Policy for Territorial and Environmental Management of Indigenous Lands (PNGATI), instituted in 2012 by Decree 7.747/2012, which brings essential elements for the defence of territories, management and recovery of degraded areas, community management of agroforestry products, for maintaining the forest standing and strengthening the community that defends it. These are practices elaborated and implemented millennia ago by Indigenous Peoples, and which, during a short period of indigenous participation in decision-making spaces, were recognized in national climate policies.

Supporting Indigenous Peoples and local communities in their traditional practices, in the promotion of food and energy sovereignty of communities, in the guarantee of their needs from the construction of resilient and locally adapted structures, in the strengthening of community management capacities is the strategy to protect and recover ecosystems and build not only a contingency plan for the climate crisis, but also a plan for the future.

International finance is a necessary global ambition for tackling the climate crisis and achieving the goals of the Paris Agreement. However, it is not enough to mobilize billions of dollars in climate finance and apply it to solving false problems.

Only 1% of the annual funding budget is accessed by indigenous peoples, most of the resources are transferred directly between countries and multilateral organizations, and sometimes fund process, projects and implementations that do not relate to addressing the climate crisis.

Meanwhile, Indigenous Peoples, who make up 5% of the world’s population, are directly responsible for protecting 80% of global biodiversity, as demonstrated by research conducted by global scientists on forest governance and the marginalization of Indigenous Peoples from the climate debate.

The funds mobilized by countries are necessary for those who for centuries have been performing the most important environmental service for tackling the climate crisis: the defence and maintenance of forests, traditional territories and their biodiversity.

According to a recent study by the Institute for Socioeconomic Studies (INESC), the annual cost of implementing an Environmental and Territorial Management Plan in Brazil is around US$ 265,000 to US$ 4.4 million, depending on the size of the Indigenous Land. A derisory amount when compared to large infrastructure projects, reconfiguration of land use patterns and international cooperation agreements.

In order to respond to the climate crisis, it is necessary to work together and cooperate beyond the spaces of international articulation, driven by a sense of global responsibility beyond borders. The many nations coming together at this important time need not only to develop contingency plans for climate change, but more importantly to affirm their commitment to a plan for the future.

In order to work together, it is important that Indigenous Peoples and local communities are duly included in spaces for debate and decision making in order to influence the definition of international policies and agreements. Traditional peoples are rarely included in spaces for participation and debate. This results in flagrant gaps in the protection of the human and socio-environmental rights of indigenous peoples and local communities in various international agreements.

Climate agreements (such as the Paris Agreement and its rules), economic agreements (such as the Agreement between the European Union and Mercosur) and the internal legislation of countries on the importation of commodities that imply forest risk need to be duly and urgently revised so that they include in their texts respect for the rights of indigenous peoples, the security of their land tenure rights through land demarcation, the creation of safeguard mechanisms for indigenous rights and traceability systems for production chains and their impacts on territories and communities.

Furthermore, it is necessary that countries that claim to be supporters of Indigenous Peoples and that are in the fight against the climate crisis take specific measures to boycott the Brazilian government and follow up with reprisals against companies and investment funds that pave the way for the destruction and contamination of territories and promote violence and genocide against traditional peoples.

Read the APIB letter in full

We, Indigenous Peoples of the Brazilian Amazon, have long observed climate change and its effects due to our relationship with the Mother Earth. From her, we receive all our sustenance needs in addition to the explanations for the phenomena that affects the lives of all living and cosmological beings.

In Brazil, climate crisis is directly related to the greed over Indigenous lands and the natural resources therein, coupled with the ongoing regression and rollback of Indigenous and environmental safeguards and rights. It is essential to think seriously about the need to respect the socio-biodiversity present in our territories, especially at this time that we are living in, in which a virus stopped the world and affected the routines of billions of people from all social classes and different cultures. However, the current government in Brazil is acting in lethal ways with anti-environment, anti-climate, and anti-Indigenous policies. Our territories, which belong to us by our Constitutional right, are being invaded by illegal miners and loggers; villages are surrounded by large-scale cattle and soybean farms; rivers are being contaminated with pesticides and mercury; and the Amazon rainforest is burning to ashes. Yet, governments and funds that operate internationally continue to finance this unbridled greed, this economy of destruction that kills and destroys lives and the planet.

Read the COIAB letter in full

Coordinator of COIAB's representation in Brasilia

Participation of Indigenous Peoples of Brazil at COP26

Participation of Indigenous Peoples of Brazil at COP26

The page you requested could not be found. Try refining your search, or use the navigation above to locate the post.