FOR THE PERMANENCY OF OUR STRUGGLE IN FAVOR OF DIFFERENTIATED HEALTH 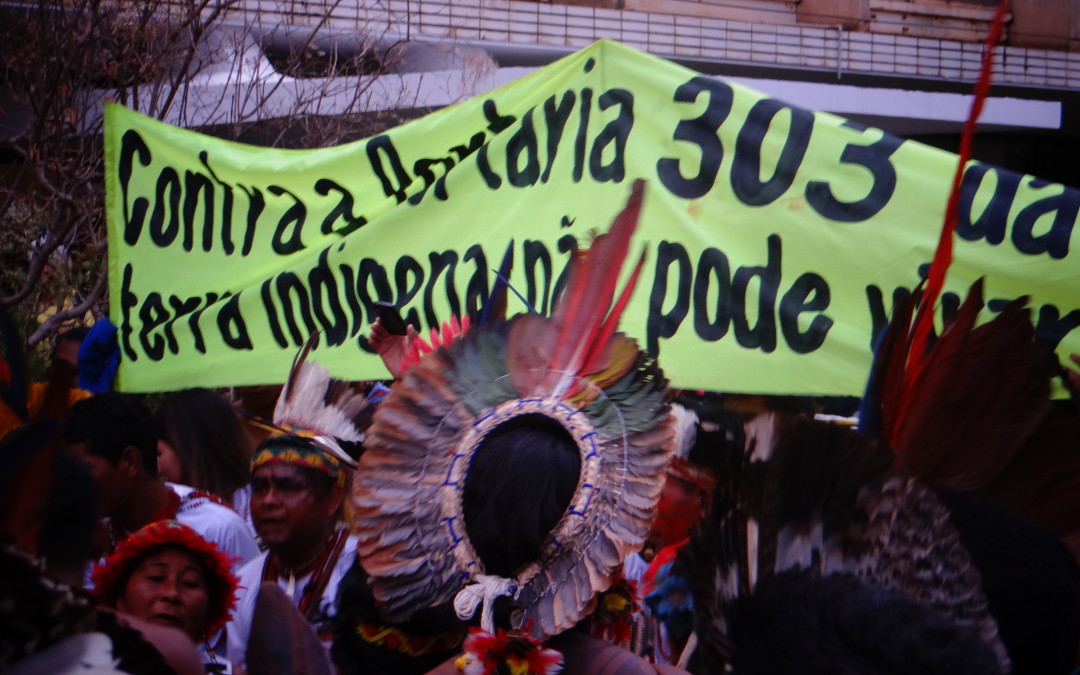 Guarani Kaiowá and Ñandeva from Aty Guasu and Terena Board indigenous leaderships, peoples from Mato Grosso do Sul, besides directors of Brazil’s Indigenous People Articulation (Apib), have been to the Justice Ministry, on this friday early afternoon, 28, to reinforce complaint against the racist attacks of Luiz Carlos Heinze (PP/RS) and Alceu Moreira (PMDB/RS) congressmen (see here) and to express concern about the PEC 215 Special Commission.

“The racist attacks from the ruralists Congressmen happened in a Federal Congress public hearing. To the PEC 215, the ruralists already pledged about 20 hearings. We fear that these hearings are fit to, once again attack us in a racist way, with hate”, highlights Lindomar Terena.

The group was heard by representatives of National Security Secretary and the Indigenous Matters Special Advisory, ministry organisms. Territorial demands, besides protests against Ordinance 303, were also addressed at the meeting.

“We experienced a shameful State powers and capital owners or representatives agreement, to the detriment of our people constitutional rights. A virulent criminalization, delegitimizing, discrimination, racism and originary people extermination campaign”, says piece of the complaint-letter filed with the ministry.

TO THE MOST EXCELLENT MR. JOSÉ EDUARDO MARTINS CARDOZO STATE MINISTER OF JUSTICE

We, indigenous leaderships signed above, in name of the Brazil’s Indigenous People Articulation – APIB, of the Guarani Kaiowá Great Council (Aty Guassu) and the Terena People Board, mobilized in Brasília – DF, we hereby denounce to your honor the intensified attacks promoted against our peoples rights, with great concern on this election year, by distincts society economical and political powers and from the brazilian State, that try to perpetuate, at any cost primarily the agro-export development model that make it viable their power, accumulation and profit interests, and appropriating and dispossession of our territories.

We experienced a shameful State powers and capital owners or representatives agreement, to the detriment of our people constitutional rights. A virulent criminalization, delegitimizing, discrimination, racism and originary people extermination campaign which seeks to legalize the assault and usurpation of indigenous territories and their wealth. Hence the commitment of these enemies to prevent in any way the demarcation of the few lands that were left with the colonial invasion.

Are part of this campaign:

The same way we claim the revocation of other published instruments by the Executive Power such as the Ordinance 2498, from october 31st, 2011, that determines the summoning of federated beings to participate from indigenous lands identifying and delimitation procedures, the Interministerial Ordinance 419 from october 28, 2011, that restricts the term to the public administrations organs and entities expedite infrastructure that reach indigenous lands environmental licensings, and the Decree nº 7.957, from march 13, 2013, that institutes state instrument to Militarized repression of any action of the indigenous peoples, communities, organizations and social movements that decide to stand against enterprises that impact their territories.

In the face of this backdrop of threats to our peoples rights noticeably sharpened in regions as Mato Grosso do Sul, Amazonas, Bahia south, among others, we ask to Dilma’s government, specially to the ministry that your honor preside, the attendance to our demands hereby presented, prioritizing immediately our land demarcation, whose lacks contributes to the increase and aggravation of the actual picture of violence against our people.