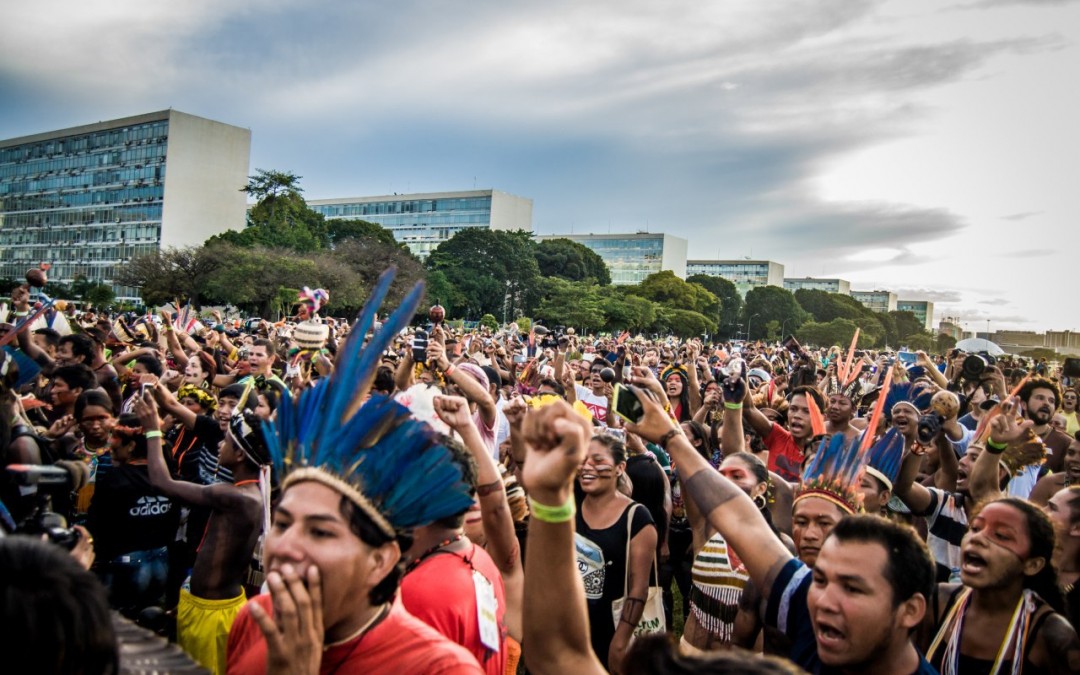 Indigenous mobilize in record numbers in a display of democracy to the government that works to end native Rights.

The 14th Free Land Camp (Acampamento Terra Livre – ATL) ended today (4/28) in Brasilia, after days of intense activities and protests. The results were historical. More than four thousand indigenous, originating from 200 communities throughout the entirety of Brazil, were present displaying the force of the indigenous movement. The initial balance was that approximately 1.6 thousand individuals would come the nation’s capital for the event. Today we can observe that this was the largest ATL ever.

“We affirm that we will not tolerate violence, loss of rights or threats perpetrated by the Brazilian State and by economic oligarchs acting against our lives and our rights. We also call upon all of the Brazilian society as well as the international community to join the fight of the original peoples in defending traditional territories and mother nature, for the good of all living beings” states the camp’s final document.

The document was received by the Federal House and the Ministries of Education, Health and Justice. The indigenous movement, however, has refused to participate in meetings requested by the Minister of Justice, Osmar Serraglio, and by the Government’s Chief of Staff, Eliseu Padilha. The two are ruralist politicians and the main proponents of measures against indigenous rights within the Federal Government.

Throughout the week, also due to pressures caused by the mobilization, the National Indigenous Fund (Funai) published reports identifying four Indigenous Lands belonging to the Guarani people, one in Paraty (RJ) and another three in Vale do Ribeiro, in São Paulo, as well as one land of the Pipipã people, in Pernambuco. All in all, the areas represent territories corresponding to 70 thousand hectares.

The Brazilian indigenous movement has consolidated unity on its fight and has been forming an international alliance with indigenous leaderships of six countries (Panama, Costa Rica, Guatemala, Ecuador, Bolivia and Indonesia). It has strengthened protagonism among indigenous women and youth and has received support from other social movements in the country. It has also disseminated indigenous culture and its demands like never before, leaving a tough message for the Temer government: “we do not accept attacks on the rights of original peoples.”

Over the last four days, work groups discussed, among other themes, the pause in demarcation of indigenous lands; the weakening of public policies and institutions supporting indigenous issues; anti-indigenous legislation being proposed in Congress; the “Time Frame” thesis which considers indigenous lands to be only those that were controlled by indigenous communities at the time the Constitution was promulgated (on October 5th, 1988).

Coverage of the camp made by indigenous communicators and partners reached 8.5 million people on social networks throughout the week on the movement’s official page alone. National and international press disseminated the march of thousands of indigenous in Ministries’ Esplanade, main access to government buildings in Brasilia, and published images of the “Demarcation Now” image on banners held up high in front of Congress. Today, the world is more aware of the plight of indigenous peoples in Brazil.

At the beginning of the week, a music video was released showcasing the participation of more than 25 renowned Brazilian artists which was entitled “Demarcation Now”. In the video were artists such as Maria Bethania, Gilberto Gil, Ney Matogrosso, Chico César, Carlos Rennó, Lenine, Nando Reis, Zeca Baleiro, Letícia Sabatella, Elza Soares, Zeca Pagodinho, among others.

The ATL also taught a lesson in democracy to the Temer government. On Tuesday (4/25), on its first march of the week, indigenous were received with teargas and rubber bullets in front of Congress. On the next day, they were prohibited from entering the Senate to watch a public hearing and were intimidated by police on the way to and from the camp. In spite of this, on Thursday (4/27) the indigenous held another peaceful march in the center of Brasilia to show their indignation with the treathening and the loss of rights.

For all this motives, the 14th Free Land Camp was a milestone in the fight for and defense of indigenous rights. And the fight goes on.