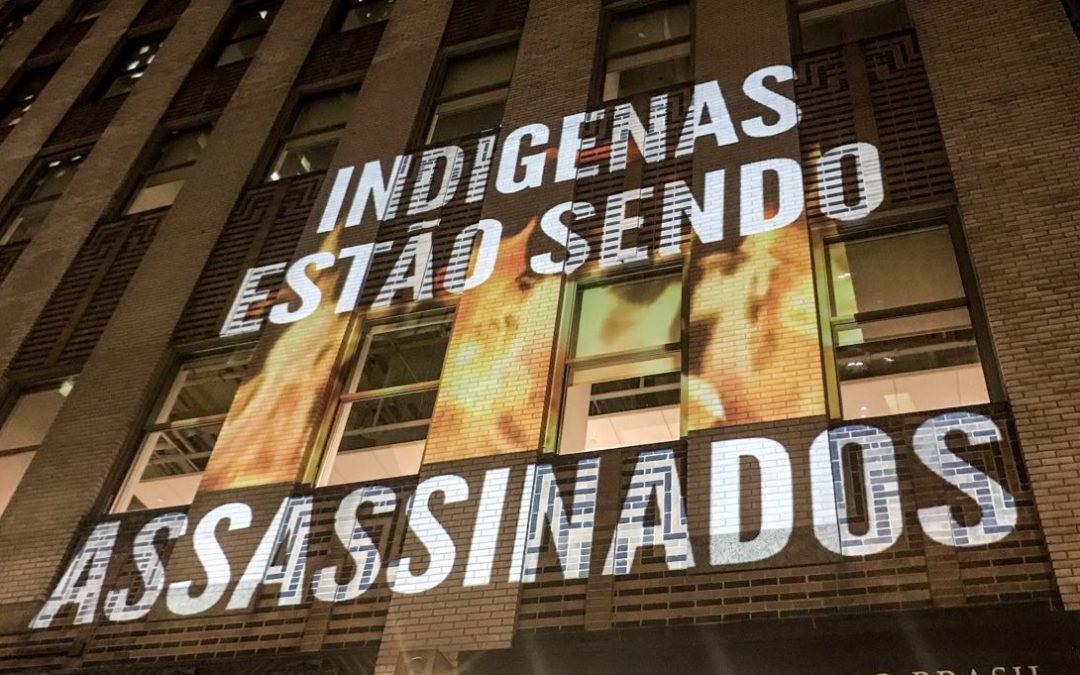 Earlier this year we held a national campaign called Red January. With the motto Indigenous Blood: Not a Single Drop More, we denounced the start of the offensive against indigenous peoples that began as soon as Jair Bolsonaro was inaugurated President. Immediately on taking office, he turned policies in support of Indigenous Peoples over to the worst agribusiness interests, as well as fanning the flames of hate speech and prejudice against Indigenous Peoples.

These crimes reflect the escalation of hate and barbarism inflamed by Jair Bolsonaro’s government, which is attacking us daily, denying our right to exist and promoting the historical illness of racism, which Brazil still suffers from.

We are adrift without protection from the State, which is not fulfilling its constitutional duties. The current administration is acting outside the law, criminal in its political practice and is operating in a genocidal way, seeking to expel us from our territories, killing our culture, making our roots bleed.

The tension, persecution and lack of safety felt by Brazil’s Indigenous Peoples is increasing. We are being attacked, wiped out and criminalized. An attack on Indigenous life is an attack against humanity, as we Indigenous Peoples of the world defend 82% of global biodiversity. In Brazil, we are almost a million Indigenous People. We protect 13% of Brazilian ecosystems. We are in the whole country. We are among the planet’s richest cultures, represented by 305 peoples and 274 languages, and over 180 cases of peoples in voluntary isolation.

Much is said about fighting climate change, but it must be understood that our survival will guarantee the preservation of what is most important to the future of humanity. Mother Earth cannot handle another 50 years of the current predatory economic model. We know that we are in danger and that there is no more time.

We demand Justice, and that measures are taken immediately! We demand that the government authorities investigate the facts and punish the criminals who perpetrated these murders strictly, so that the feeling of impunity doesn’t motivate more criminal actions against our people, brutally culling Indigenous lives.

Here at COP25, where we’re participating with a delegation of over 20 Indigenous People from across Brazil, we demand that Indigenous Peoples’ rights are respected in fully implementing the Paris Climate Accord.

To our friends and allies from civil society around the world, we also ask for help. This will be Red December! We call for a global mobilization. Our people in Maranhão state occupied BR 216 Highway, seeking justice for all of the murders, and we need everybody to join the fight, make it a collective struggle.

This will be the Red December for Indigenous Peoples and peoples of the planet, and our right to exist. Indigenous Blood: Not a Single Drop More!