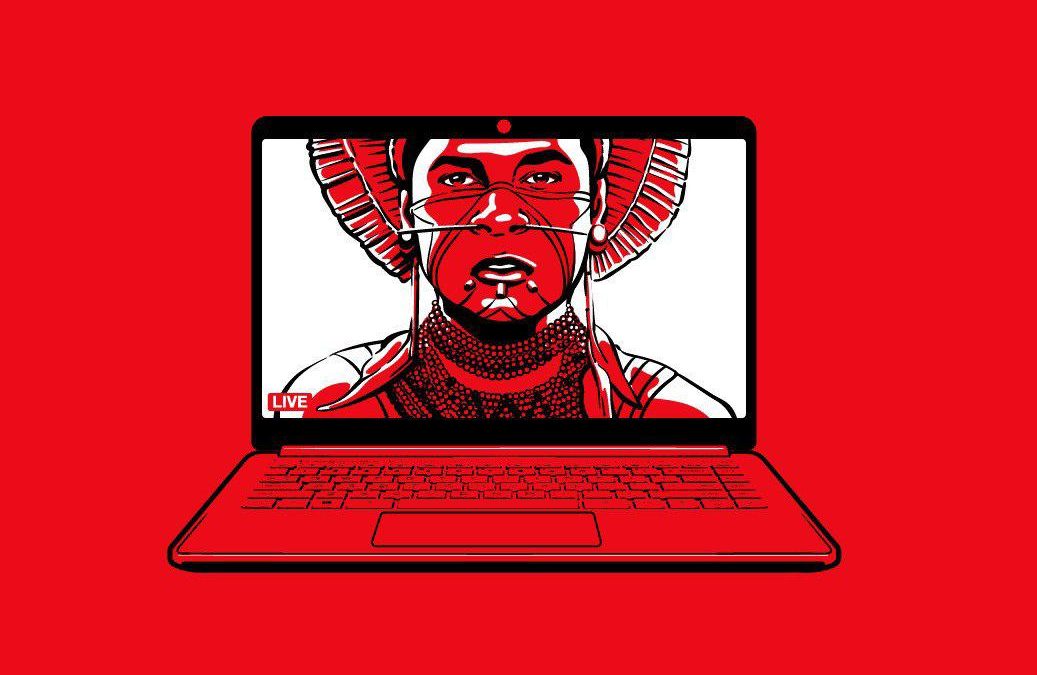 We, indigenous peoples, organizations and leaders from every region of Brazil, have been gathering for 16 years in the federal capital for our annual Free Land Camp (ATL), the Great National Indigenous Assembly. Due to the need for social isolation imposed by the Covid-19 pandemic, we have held ATL online with a great number of discussions, debates, seminars, testimonies and livestreams throughout the week. For 520 years we have been resisting all kinds of invasions; besides physical violence, forced labor, and the plunder and expropriation of our territories, diseases were used as the main biological weapon to exterminate us. Currently, we are being attacked by the worst virus in the history of our country: the Bolsonaro government. Thus we have come to publicly denounce the following issues.

We denounce to national and international public opinion, that we, indigenous peoples of Brazil, more than 305 peoples, speakers of 274 different languages, are in the crosshairs and victims of a genocidal project of the government of Jair Messias Bolsonaro. Since the beginning of his mandate, he has chosen us as one of his priority targets, saying that he would not demarcate an inch more of indigenous land, and that all land demarcation carried out until now would have been forged, and therefore should be revised.

As soon as he took office, Bolsonaro issued Provisional Measure 870/19, which determined the dismantling of the National Indigenous Foundation (FUNAI) and its powers, transferring the responsibility for environmental licensing and land demarcation to the Ministry of Agriculture, led by the Ruralist Caucus, a parliamentary faction renowned for its hostility towards our peoples, represented in the figure of the agriculturalist Minister Teresa Cristina, also known as the “muse of poison” [for her work to deregulate the use of pesticides]. The suspension of this Provisional Measure by the National Congress required a great deal of effort on our part and from our allies.

Bolsonaro dismantled public policies and bodies that had until then, albeit precariously, served our peoples, appointing people who are openly against indigenous rights, such as the president of the National Indigenous Foundation (FUNAI), federal police officer Marcelo Augusto Xavier da Silva. A former adviser for the Ruralist Caucus during the Parliamentary Inquiry Commission (CPI) of FUNAI / INCRA in 2017, which incriminated civil servants, indigenous leaders, indigenist representatives and attorneys, Xavier da Silva published in the Federal Official Gazette, on April 22nd 2020, the Normative Instruction No. 09 that “rules on the requirements, regulation and analysis to issue a declaration of limits recognition in relation to private properties in indigenous lands”. Since it aims to legitimize and allow the issuance of land titles to invaders of indigenous lands, this measure contravenes the institutional duty of the indigenous body to protect the rights and territories of indigenous peoples. In addition to this decision by the president of Funai, other measures have been taken against indigenous peoples and their rights, namely: (1) the decision to review or to cancel administrative procedures for the demarcation of indigenous lands, such as the Tekoha Guasu Guavirá territory, in Guaíra and Terra Roxa (Paraná state), of the Avá-Guarani people; (2) the replacement or impairment of Working Groups on identification and delimitation issues; (3) the dismantling or alteration of Boards of indigenous bodies; (4) workplace harassment and bullying of public servants; (5) the continuation of public policies for homologated lands only; (6) the irresponsibility of not equipping, even financially, regional coordinations and grassroots groups in order to protect our peoples and territories from the Coronavirus pandemic; (7) authorizations that allow fundamentalist pastors to enter indigenous territories.

Thus, this government, subservient to national economic interests and international capital, aims to reduce and restrict our rights, especially territorial rights, by encouraging illegal practices on our lands, such as: mining, deforestation, logging, cattle farming, monocultures and land grabbing, which is about to be legalized through the bill 910/19, currently progressing through Congress. Further to these illegal practices, there are the constant threats of large-scale mining operations and various infrastructure projects such as hydroelectric plants, transmission lines and roads. All of these are clear attempts to transform public lands into commodities.

All of these illicit and unconstitutional acts constitute a death project for our peoples. They entail the destruction of our forests, our rivers, biodiversity, our life sources. In short, they entail the destruction of Nature, Mother Earth, a heritage that has been preserved for thousands of years by our peoples and that til today strategically contributes to the preservation of environmental and climatic stability and to the well-being of humanity, providing important environmental services to the planet.

It is this heritage that ruralists, agribusiness and international corporations want to steal from us; by restricting or suppressing our constitutional rights, they are actually claiming that our original rights, and our very existence, constitute an obstacle to their enterprises and their so-called development plans. That is why they are trying to reverse the legal basis of our rights, nationally and internationally, through measures such as Opinion 01/17, the ‘time frame thesis’, which aims to limit our right to the lands we have traditionally occupied to only those occupied on October 5th, 1988, date of promulgation of the Federal Constitution, which in fact, simply recognises a right that was already ours, our original birthright to the land, a right we have had since before the colonial invasion and the emergence of the Brazilian national State.

Our extermination seems to be a matter of honor for the Bolsonaro government, which is taking advantage of the pandemic crisis to intensify its negligence towards our peoples. Thus, it is also trying to put an end to the differentiated public policies won over the last 30 years in the education system, alternative economic activities, environmental laws and especially in healthcare. After attempting to bring an end to the indigenous health subsystem (SESAI) via plans to municipalize or privatize it, the spread of coronavirus in our territories has made clear the government’s genuine desire for our extinction: it does not protect us from invaders, on the contrary, allowing them to contaminate our communities, which could lead to mass extinction, beginning with our elders, who are sources of tradition and wisdom for our peoples, for generations to come. And as if that wasn’t enough, the government encourages harassment and violence by private interests over our natural assets and sacred territories. The recent dismissal of the director of environmental monitoring at IBAMA (the Brazilian Institute of Environment and Renewable Natural Resources) after his actions to crackdown on illegal mining in Tis in southern Pará, reveals the intentions of the current government.

Faced with this institutionalization of genocide by the Bolsonaro government, we alert national and international society, and demand the following actions:

1. The immediate demarcation, regularization, monitoring and protection of all indigenous lands;

2. The revocation of Opinion 001/17 of the Federal Attorney General;

3. The immediate removal of all invaders from indigenous lands – miners, land grabbers, loggers, farmers – given that they are destroying our natural resources along with our cultures, and, at this present time in particular, they are spreading diseases and COVID-19; constituting a serious risk for all peoples, especially indigenous peoples in voluntary isolation;

4. The adoption of measures that restrict the access of outsiders in indigenous communities, including miners, traders, loggers, as well as proselytizing fundamentalist religious groups that demonize, in our very own territories, our ways of life, spiritualities, knowledge, traditional ways of treating diseases;

5. The implementation of actions that aim to guarantee basic sanitation, drinking water, adequate housing and other equipment that ensure good sanitary infrastructure in the communities;

6. The adoption of measures that guarantee good nutritional status in all indigenous communities and the guarantee of a permanent plan for food security and sovereignty for our peoples and communities;

7. The facilitation of health teams to enter and remain in indigenous areas, ensuring that preventative actions to protect against the pandemic are effective and continued;

8. Adequate infrastructure and logistical support for health teams, providing them with all the necessary equipment for carrying out disease prevention, such as medicines, serums, gloves, masks, transportation, fuel;

9. The guarantee of referral hospitals – in municipal and state capitals – for medium and high complexity care, providing clinical tests and proper hospitalization for patients with COVID-19 and other diseases;

10. Financial resources for protective materials for all people in indigenous communities, such as clean water, soap, bleach, alcohol gel, gloves and masks, as well as adequate guidance in the importance of using these materials during the Covid-19 pandemic;

11. Provide adequate training for indigenous health workers, hygiene and environment officials, midwives and all those working in the health sector within communities, to protect and prevent COVID-19;

13. The immediate purchase of COVID-19 tests for as many people as possible in all indigenous communities, in order to get a proper diagnosis of the current situation of the pandemic within indigenous lands and, with this, to improve prevention, control and treatment;

14. End underreporting of infected indigenous people. All cases must be reported, regardless of whether they are in formally recognised indigenous lands or not, even those who live in urban areas. The Ministry of Health and the Emergency Public Health Operations Center must ensure that all indigenous cases and deaths are included in the Covid-19 Epidemiological Bulletin, in order that the complete data guide public policy;

16. FUNAI and SESAI, as well as Funai’s Regional Coordinations (CDRs) and Special Indigenous Sanitary Districts (DSEIs) must be incorporated into the Emergency Public Health Operations Center at national, state and municipal levels;

17. The National Congress must shelve all legislative initiatives of the Ruralist Caucus and other sectors of capital that aim to restrict or suppress the fundamental rights of our peoples, especially the original right to the lands that we traditionally occupy;

18 The Judiciary must suspend all proposals for repossession presented by invaders, alleged owners or entrepreneurs, against indigenous peoples who have retaken their traditional lands;

19. The Supreme Federal Court must judge as soon as possible the Extraordinary Appeal – RE nº 1017365, as having General Repercussion, in order to establish, definitively and fully, the Indigenato, the original birthright of traditional occupation of our lands and territories, in order to correct the trajectory of aggression against the indigenous peoples of Brazil.

20. The Bolsonaro government must suspend the execution of any infrastructure (hydroelectric plants, roads, etc.) or agro-industrial works that may impact our territories, since they allow for the presence of non-indigenous people, potential agents for the spread of Coronavirus and other harmful diseases to our peoples and communities.

21. Finally, we demand the revocation of Normative Instruction 09, of April 16th, 2020, published by the president of FUNAI, in the April 22nd edition of the Official Gazette (DOU), which allows, unlawfully and unconstitutionally, the transfer of land titles to private individuals within indigenous areas protected by Brazilian law. The National Congress must also shelve Provisional Measure 910/19, which attempts to legalize the criminal act of land grabbing in Indigenous Territories, Conservation Units and other territories of traditional communities.

To our peoples and organizations we say: always resist, with the wisdom received from our ancestors, for the present and future generations of our peoples. May national and international solidarity redouble in this moment of death, which is reinforced by the negligence of the Bolsonaro Government, but at the same time, a moment for the creation of a new era for our peoples, for Brazilian society and for humanity as a whole.

For the right to live. Indigenous Blood Not a Single Drop More.