‘INDIGENOUS EMERGENCY’: EIGHT-EPISODE WEBSERIES TO BE LAUNCHED ON AUGUST 26 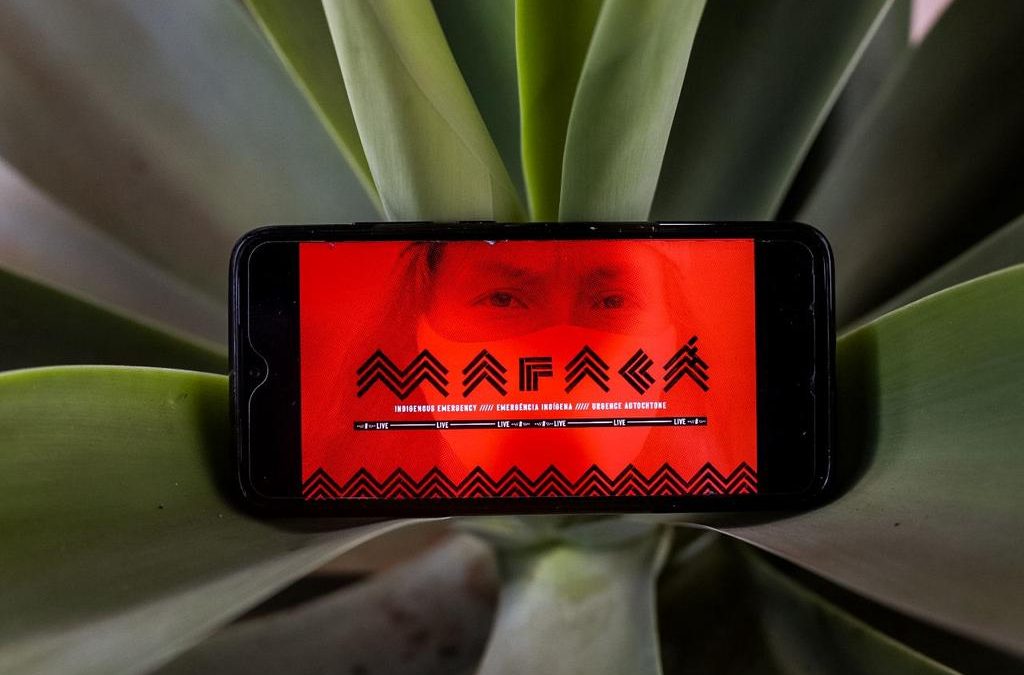 To save lives threatened by the Covid-19 pandemic, the Articulation of Indigenous Peoples of Brazil (APIB) is launching a web series this Weds 26th August at 19h. With more than 50% of people directly affected by Covid-19 and more than 27 thousand indigenous people infected by the virus, the series “Maracá – Indigenous Emergency” aims to mobilize international networks of support for the emergency plan drawn up by indigenous peoples to face this moment of crisis.

The eight-episode series will be available on APIB networks (@apiboficial) and will feature appearances from more than 200 personalities including artists, scientists, activists and indigenous and non-indigenous researchers from different countries. Episodes will be released twice-weekly on Wednesdays and Sundays, on the 26th and 30th of August and on the 2nd and 6th of September on APIB’s Youtube channel. Livestreams will also be held at 7 pm on the opening days of the episodes, with the participation of indigenous leaders and other supporters.

The webseries is a follow-up to the Maracá – Indigenous Emergency live event held on August 9 to draw attention to the seriousness of the Covid-19 crisis in Brazil and to increase collective efforts to face the pandemic. Among the primary objectives of the initiative is the collection of funds to finance relief actions in indigenous territories. This can be done virtually through a QR code and via the website (emergenciaindigena.apib.info).

‘We make our maracas resound so that indigenous lives impacted by the pandemic are remembered and to draw society’s attention to what is happening to us’, warns Sônia Guajajara, APIB coordinator. The maraca is a striking symbol of indigenous peoples and is present in rituals of both struggle and celebration.

The series format features eight episodes divided by theme and woven together with texts drawn from the speeches of Brazilian indigenous leaders (Chief Raoni, Sonia Guajajara, Kretã Kaingang, Marcos Xukuru, Shirley Krenak, among others). Speeches were read and interpreted by the invited personalities, and are accompanied by a montage of documentary footage and illustrations of indigenous peoples.

To date, 27,034 indigenous people have been infected by Covid-19 in Brazil and 717 have lost their lives to the disease, according to data from APIB’s National Committee for Indigenous Life and Memory. One hundred and fify-five indigenous ethnicities have been directly affected, an alarming situation that gets worse every day, because in addition to the threat of the virus, racism, illegal deforestation, agribusiness and the criminal action of loggers continues to advance into indigenous territories.

‘We are politically and spiritually prepared to continue to advance in the fight, seeking organs of control to guarantee the physical, cultural and territorial integrity of the indigenous peoples’, says Dinamam Tuxá, APIB coordinator.

Faced with the negligence of the Brazilian government in guaranteeing the protection of indigenous peoples during the pandemic, the emergency response plan, entitled Indigenous Emergency, was drawn up by APIB together with its grassroots organizations, doctors and researchers.

The coordinated campaign was launched at the end of June, informed by expert guidance on comprehensive and differentiated medical care, legal actions with a political impact and communication and information strategies on preventive measures.