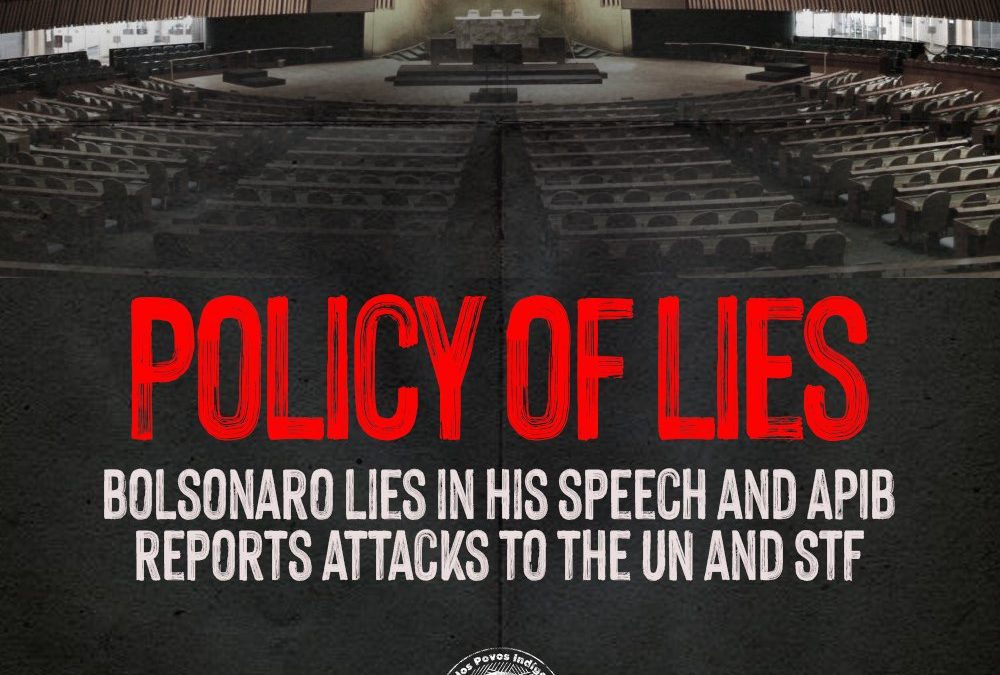 By blaming Indigenous Peoples and traditional communities again for the Amazon fire, Jair Bolsonaro consolidates lying as a political move during the General Assembly of the UN. Also, on Tuesday (22nd September) APIB filed a complaint with the Federal Supreme Court (STF) requesting the government to explain in court the lies it spreads and informed the UN about the attacks on Indigenous Peoples.

In his speech as Head of State at the 75th edition of the General Assembly of the United Nations, Jair Bolsonaro distorts reality to sell the image of a Brazil that does not exist. Thus, relieving his administration of any responsibility for actions to combat the pandemic and protect the environment. Bolsonaro’s main tool is lying.

Bolsonaro’s allegations aim to give credit to his administration for actions that were not theirs. For example, the initial amount proposed by the federal government for Auxílio Emergencial (Emergency Aid), one of the main economic policies created during the pandemic, was only R$200.00.  But social mobilization with the National Congress ensured an increase to R$ 600.00. The Emergency Aid  was also extended to a total of 9 installments (5 installments of R$600 and 4 t of R$300), which altogether amounts R$4,200, equivalent to about US$771,49. Thus, in his speech, Bolsonaro lied both about the government’s position in approving the Emergency Aid and the amount – which he claimed was about US$1,000 dollars.

In regard to the environment, since the beginning of his administration Bolsonaro has made 127 false or distorted announcements (data from the fact checking agency Aos Fatos). And, once more, the president chose to lie and attack.

He lied when he related the Amazon’s and the Pantanal’s fires to the fact that our forests are humid and blamed Indigenous Peoples for the fire outbreaks, shifting responsibility for criminal deforestation caused by landowners. Data from NASA monitoring system shows that 54% of Amazon’s fire outbreaks are related to deforestation. In Pantanal, the Brazilian Federal Police is investigating farms that were criminally burned in order to open pastures for livestock.

Misinformation as a strategy

Bolsonaro also claims that his administration is suffering disinformation campaigns.
It is increasingly evident that the president’s criterion for defining disinformation is based on what is convenient for his government. Criticism, data, formal questioning are part of the democratic rule of law. However, Bolsonaro’s administration has used official structures to promote and encourage attacks on any people, organization or media outlets that point out flaws or demand responsibility from his government.

For example, last Friday (18th September), General Augusto Heleno, State Minister Head of the Institutional Security Office, published declarations on social media criminalizing the Coalition of Indigenous Peoples of Brazil (APIB) and its leadership, and directly attacking Sonia Guajajara, APIB’s executive-coordinator, whose trajectory in defense of Indigenous and socio-environmental rights is internationally recognized. The Minister alleged that APIB has committed a crime against the State for denouncing the flagrant environmental crimes for which President Jair Bolsonaro must be held responsible.

Fearing for the safety of our leaderships, APIB filed today (22nd September) a complaint with the Federal Supreme Court (STF) requesting Minister Heleno to explain in court the lies and attacks he made to APIB and Sonia Guajajara.

“The Government and its representatives cannot place targets on the backs of leaders, activists or people who cause them inconvenience due to their political position, under penalty of, then, committing crimes that must be punished ”, emphasizes one of the excerpts from document that can be accessed in full here.

Today (22nd September) we have also sent a statement to the UN about Bolsonaro’s government attack on APIB, highlighting that Minister Heleno and Bolsonaro’s administration have made several intimidating accusations against our actions in defense of Indigenous Peoples
and that this is an indecorous attempt at criminalization, a completely inadequate posture for a Minister of State that underlines its anti-democratic character when it pursues those who fight for the environmental protection of ecosystems and the Indigenous peoples of Brazil.

The attack by Minister General Heleno, in addition to showing total ignorance about the history and construction of the APIB, confirms the use of disinformation as a political strategy by the Bolsonaro government, since it directs frivolous accusations on social media that encourage, above all, the criminalization of organized Indigenous movements. “The biggest crime that harms our country is the government’s failure to destroy our biomes, protected areas, illegal fires, land grabbing, deforestation and invasion of our lands and the theft of our wealth”, highlights an excerpt from APIB’s note published in response to the minister’s lying accusations.

It is important to note that, while the government abuses its power and uses smear campaigns to pursue an organization that acts to reduce the impact of Covid-19 on native peoples, more than 800 Indigenous persons have died so far, and about 32 thousand have been infected by the new coronavirus, according to data from the National Committee for Life and Indigenous Memory of APIB.

The Federal Government had to be judicially forced by the STF to present a specific combat plan to be applied in context of Indigenous peoples, contradicting Bolsonaro’s claim at the UN that he provided due assistance to them. On the other hand, when Congress Members presented a bill that provided an emergency plan to contain the damage of the pandemic, Bolsonaro vetoed parts of the bill such as the guarantee of access to drinking water, ease of access to emergency aid, among other fundamental rights.