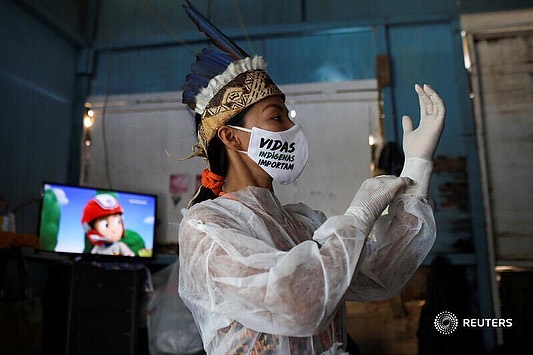 The document “Our struggle is for life” provides a complete overview of the current health and humanitarian crisis among the indigenous peoples of Brazil. Denunciations of rights violations, analysis of data presented by the Federal Government and actions to combat the spread of the virus, are the main topics addressed by the report.

The Articulation of Indigenous Peoples of Brazil – APIB announces the publication of the report “Our struggle is for life” which presents data on the impacts of the Covid-19 pandemic among indigenous peoples. The report presentation will be held on December 10, the date on which the United Nations General Assembly formalized the International Declaration of Human Rights.

The Activity will be carried out in conjunction with the APIB grassroots indigenous organizations, with the Mixed Parliamentary Front in Defense of Indigenous People’s Rights, social movements and organizations that strengthen the indigenous peoples’ struggles.

In addition to recording the growth in the number of infected and killed by Covid-19, the report contextualizes the vectors of virus entry in the territories and the omission of the government to control the spread of the disease.

Violence against indigenous peoples, in this pandemic period, was intensified and this aggravation was encouraged by the Bolsonaro government, according to the survey carried out by Apib.

“Our struggle is for life” is a material that integrates the social control actions of the Indigenous Emergency plan, an instrument built by Apib to demand from the Federal Government the fulfillment of its constitutional duty to protect indigenous peoples and organize fronts of emergency response actions to confront the pandemic.

The document was organized by APIB through the National Committee for Indigenous Life and Memory, that develops the community monitoring of the spread of the virus among peoples. The Committee is composed of representatives of APIB grassroots indigenous organizations, indigenous leaders and members of networks built to face the pandemic in different territories.

“We also show in this document the thousands of actions carried out by the indigenous movement, throughout Brazil, to save lives. We do not want to take the role of the Government, but it is not an option to sit idly in the face of so much political omission and violence ”, emphasizes Sonia Guajajara, executive coordinator of Apib.