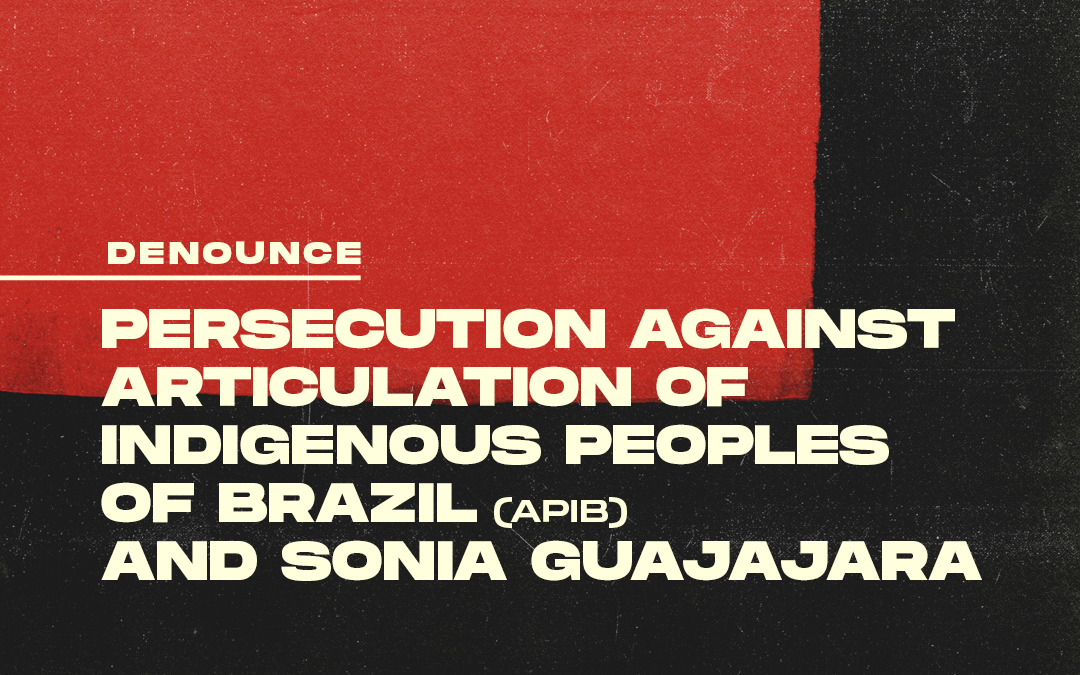 The Federal Government once again tries to criminalize the indigenous movement, intimidate the Articulation of Indigenous Peoples of Brazil (Apib), our network of grassroots organizations, and one of Apib’s executive coordinators, the leadership Sonia Guajajara, in an act of political and racist persecution.

During the month of the largest indigenous mobilization in Brazil and the week following the ‘Climate Summit’ meeting, the Federal Police summoned Sonia, on April 26, to testify in an investigation provoked by the National Indian Foundation (Funai). The body, whose institutional mission is to protect and promote the rights of the peoples of Brazil, accuses Apib of defaming the Federal Government with the web-series “Maracá” (http://bit.ly/SerieMaraca), which denounces violations of rights committed against indigenous peoples in the context of the Covid-19 pandemic. These complaints have already been recognized by the Supreme Federal Court (STF) through ADPF 709.

The racist and hateful speeches of the Federal Government stimulate violations against our communities and paralyze the State actions that should promote assistance, protection and guarantees of rights. And now, the Government seeks to intimidate indigenous peoples in a clear attempt to retrench our freedom of expression, which is the most important tool for denouncing human rights violations. Currently, more than half of the indigenous peoples have been directly affected by Covid-19, with more than 53 thousand confirmed cases and 1059 dead.

They will not trap our bodies and they will never silence our voices. We will continue to fight for the defense of the fundamental rights of indigenous peoples and for life!

Follow today, April 30, at 3:00 pm (Brasília time), the closure of the Terra Livre Camp with the positioning of Apib and its regional indigenous organizations on the case, which will be transmitted at apiboficial.org/atl2021