Indigenous people are attacked by law enforcement in Brasilia, during pacific demonstration against the 490/2007 Bill 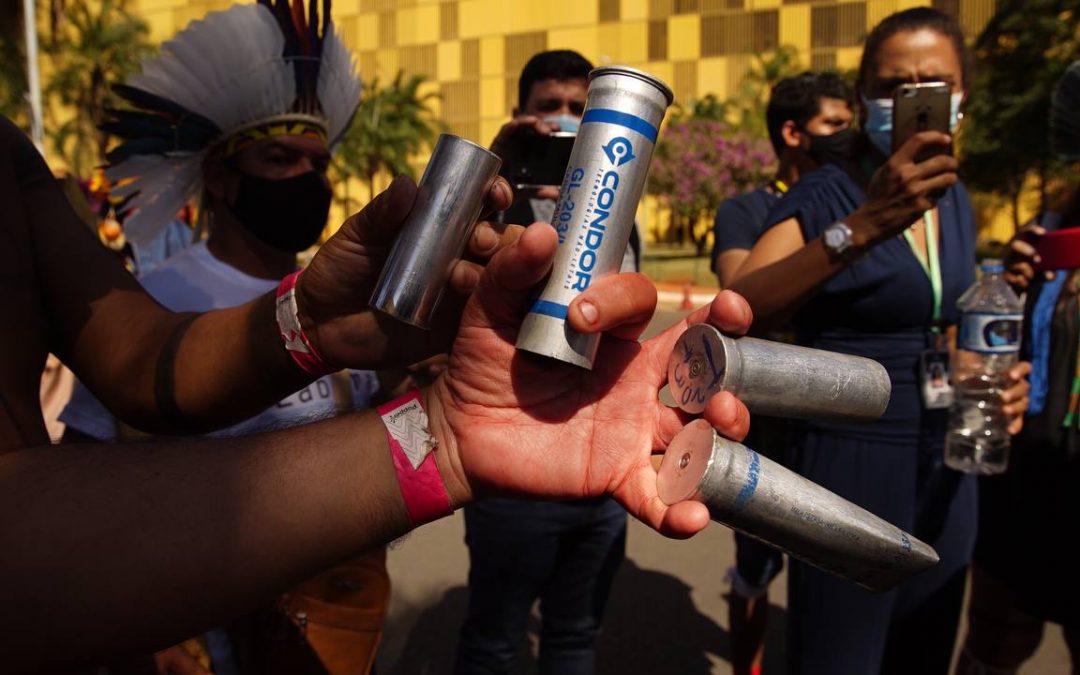 A group of indigenous people, including some children and elderlies, was attacked by the police this afternoon, during a pacific demonstration against the deliberation about Bill 490/2007 by the Brazilian National Assembly. The legal proposition that can nullify the process of demarcating indigenous lands finds itself included in the agenda of the National Assembly Commission for the Constitution and Justice. The attacks took place at the Assembly parking lot, with the use of rubber bullets, stun bombs and tear gas.

Two indigenous people (a man and a woman) are under observation due severe injuries in the “Hospital de Base” in Brasília. Around ten children, elderlies and women had light injuries and needed to be treated by the health care service from the Rise for the Earth camp, organised by Apib – Brazilian Indigenous People Association. The emergencial care for the injured people was made difficult by the police, as can be observed in some videos that record the precise moment of the attack.

The protesters were marching together by the Esplanada dos Ministérios (avenue where the most part of National Ministries are situated), when they were reached by the police, close to the National Assembly entrance. There were no action or incident caused by the indigenous people to justify the violent reaction from the police forces. According to the protesters, there were members of several police forces assembled, with a large number of repression equipment, including one ‘caveirão” (a military tank used by the police during special operations against Brazilian citizens) and a mounted troop.

This indigenous parade is part of the Rise for the Earth Camp, situated close to the National Theater during the last three weeks. Around 850 indigenous people are gathered at this camp – they belong to 48 different peoples from all Brazilian regions. They are moved by the legislative innovations under appreciation by the National Assembly that threaten their rights, mainly territorial ones.

“The relatives just came to protest against the 490 Bill, that will terminate the policy of indigenous land demarcation, and the police arrived already with their bombs. They can gather to retreat our rights, however, when we try to manifest in reaction, we are received with violence”, stated Alessandra Korak Mundukuru. “We are here along with children and elderlies, many people were hurt”, she finishes.

The session of the Commission for the Constitution and Justice was postponed – it is expected to be resumed tomorrow. During the police attack, some congressmen allied to the indigenous agenda formed a kind of barrier to restrain the troops that kept threatening the indigenous people who performed their rituals and chants. Afterwards, several oppositional congressmen assembled with the protesters. They criticized the police action and promised to denounce it before the National Assembly president, Congressman Arthur Lira.

The 490 Bill is a demand from ruralist and Bolsonarist congressmen, and, if ruled, it will avoid new demarcations, allow the nullification of Indigenous Lands, and deliver those lands to predatory enterprises, such as minery, roads and hydroelectric plants. This is an unconstitutional rule that represents an open door for a new genocide of indigenous peoples.