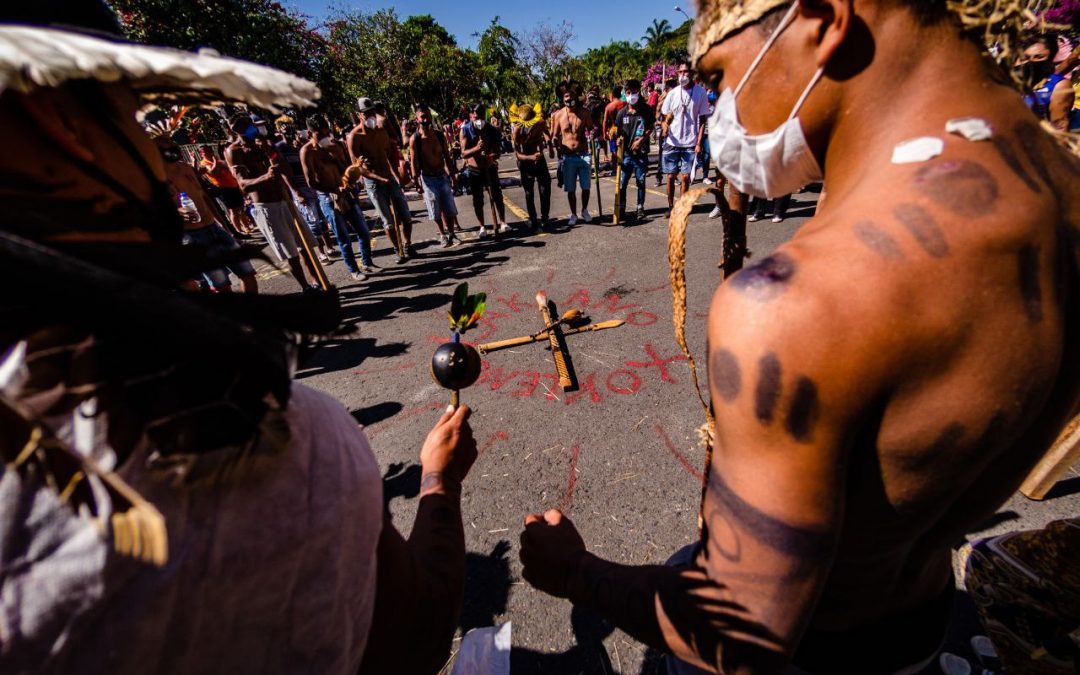 Under the leadership of ruralists and Bolsonaro’s allies, the Chamber’s Commission of Constitution and Justice (CCJ) approved, by 40 votes to 21, the Bill (PL) 490/2007. The voting ended this afternoon, June 23, after a battle of requests and procedural issues posed by opposition members, who tried to withdraw the bill from the agenda throughout the day. This Thursday, the commission analyzes eight of deputy Arthur Maia’s provisions on the bill, after which the legislation goes to a plenary vote, at an undermined date. The indigenous movement remains mobilized against the anti-indigenous agenda in Congress.

The president of the Chamber, Arthur Lira (PP-AL), and the president of the Commission, Bia Kicis (PSL-DF), maneuvered to delay the beginning of the main plenary session, allowing the committee meeting to be extended, and the bill to be approved. Since mid-morning, Kicis rejected, one by one, the numerous claims, requests for a public hearing and calls for dialogue with the Indigenous movement, which for weeks has been demanding to be heard regarding the proposal, as determined both by the Constitution and Convention 169 of the International Labor Organization (ILO).

The PL 490 is a top priority for Jair Bolsonaro and for the ruralist caucus that claims to represent agribusiness. The bill will make demarcations unfeasible, allow the annulment of Indigenous Territories and pry them open to predatory projects, such as mining, roads and major hydroelectric plants. The bill is unconstitutional, as assessed by members of the Indigenous movement and legal experts.

Kicis suspended the commission’s meeting scheduled for yesterday, after a peaceful protest by Indigenous people against PL 490 turned violent as police outside the Chamber approached in riot gear. In an act considered unusual and authoritative, she established the proposal as the only item on today’s agenda.

Police violence left three Indigenous people injured and another ten had sustained minor injuries from the confrontation. The demonstrators were protesting peacefully in the parking lot of Annex 2 of the Chamber, when they were violently attacked by the Military Police, with rubber bullets and tear gas. Children and elderly people were among the protesters.

In a statement, 170 organizations (Indigenous and allies in the resistance of the original peoples) expressed their repudiation regarding the repression carried out against the demonstrators in Brasília. “The Indigenous people who left their communities, at a time when the pandemic is still raging in the country, to take their indignation to the streets against the violent advance of various sectors on their territories are those willing to help society build a new path,” says an excerpt of the release. Read the full document here.

“What we want is for the law to be enforced, for the Federal Constitution to be upheld. This bill can nullify the demarcation of Indigenous lands in the country – it is an aggression against the original peoples,” said Dinamam Tuxá, Executive Coordinator of the Association of Indigenous Peoples of Brazil (APIB).

The demonstration is part of the Rise for Earth Camp (Acampamento Levante da Terra), which has been set up next to the National Theater, in Brasília, for the past three weeks, to protest against the anti-Indigenous agenda of the government and Congress, as well as in defense of favorable decisions at the Federal Supreme Court (STF). Approximately 850 Indigenous people from 48 different peoples from all regions of Brazil, are gathered in the Camp. They are all vaccinated and following sanitary protocols (physical distancing, use of masks and constant hand hygiene).

“Our Constitution cannot be changed by any selfish, personal interest from those who look greedily toward Indigenous Territories. This is the look we see on all the speeches that want to get PL 490 approved. Pure greed for the natural resources of the Indigenous lands, which are guaranteed by the Federal Constitution,” criticized Deputy Joenia Wapichana (Rede-RR).

According to the parliamentarian, the legislative procedure in the Commission was flawed, precisely because it failed to recognize that the matter is unconstitutional. Deputy Wapichana recalled that any regulation of Article 231 of the Constitution, which provides for Indigenous rights, should be done through a Supplementary Law Bill, and not through an Ordinary Law Project, as is the case with PL 490.

Several opposition parliamentarians recalled that the Federal Supreme Court should rule on several of the points provided for in PL 490, such as the “Temporal Mark”. This is a thesis by the ruralist caucus, which claims that Indigenous communities would only have the right to the lands that were in their possession as of October 5, 1988, the date on which the Constitution was enacted.

“They try to rush this matter into a bill so that there could be a competition with the Supreme Court. This is absurd,” Wapichana stressed.

Prejudice and discrimination against Indigenous People

Yesterday and today, government deputies made speeches that can be considered prejudiced and discriminatory against the protesters of this bill and Indigenous peoples in general. Deputy Alê Silva (PSL-MG) even compared Indigenous reserves to “human zoos” and accused the demonstrators outside the Congress of “troublemakers” and referred to them as “dumb.”

Yesterday, Arthur Lira accused Indigenous people of using drugs on the roof of the parliament. “Last week, some representatives of the Indians arrived here, invaded the National Congress, climbed to the top of the domes and sat there using some kind of drug,” he said, with no any proof whatsoever.

Joênia Wapichana also announced that she will file a complaint to the Ethics Council against another leader of Bolsonaro’s shock troop, Carla Zambelli (PSL-SP). According to Wapishana, when she met Zambelli in the Chamber’s corridors, she stated that “your Indians are murderers” and that Joênia would not represent the Indigenous People in the Chamber.