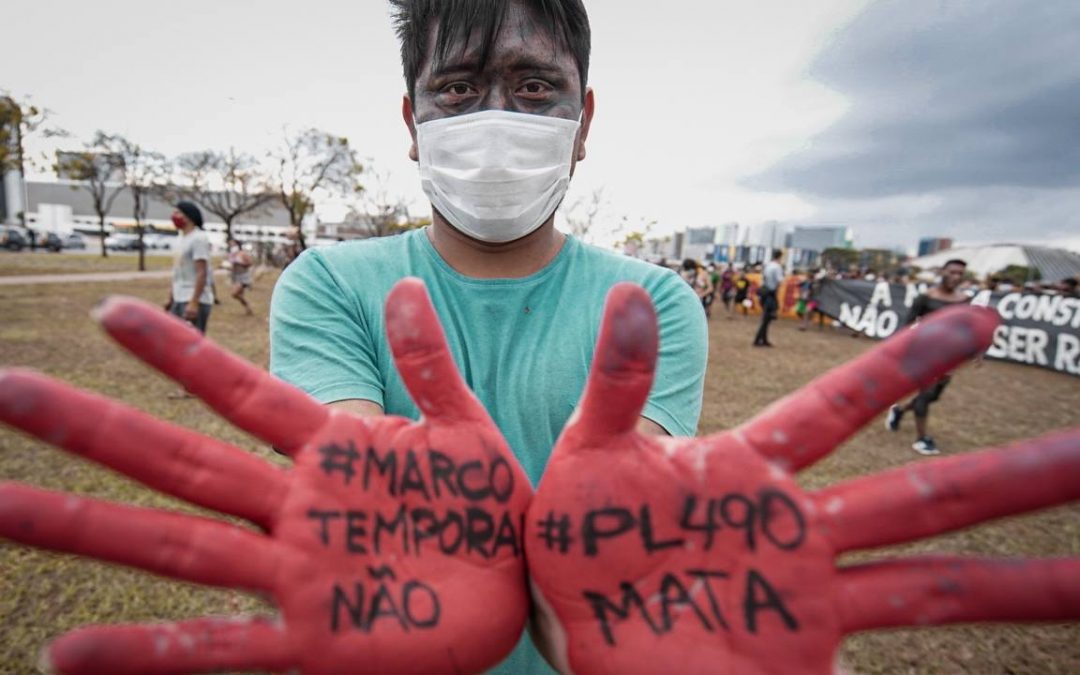 On Monday (28), Apib – Articulation of the Indigenous Peoples of Brazil held an international meeting with non-governmental partner institutions and other stakeholders to discuss the emergency situation in Brazil. Convened the previous Friday, the meeting was attended by over 200 people from 26 countries from all regions of the world. This demonstrates the international interest in the situation experienced by Indigenous Peoples in Brazil, and the relevance of Apib as a global authority on issues involving indigenous peoples and the preservation of the environment.

During the meeting, which lasted about two hours, Apib leaders shared the institution’s view on the threats that are mounting in the National Congress against the territorial rights of indigenous peoples, especially in the context of Bill 490 of 2007. This Bill transfers to the Congress the responsibility of demarcating Indigenous Lands, which submits indigenous peoples to the interests of each legislature composition. Currently, the strong presence of agribusiness and the military would make it practically impossible to advance in the demarcation of territories that have not yet had their process concluded. On the contrary: there is the risk of regression, with the annulment of the approval of Indigenous Lands already consolidated.

Attorney Luiz Eloy Terena, of the Legal Coordination of Apib, also spoke about the trial by the Federal Supreme Court (STF) of the Special Appeal involving the Ibirama-Laklãnõ Indigenous Land, of the Xokleng people in Santa Catarina state. This action, which may be resumed by the STF plenary later this week, debates the thesis of the “temporal milestone” for the demarcation of indigenous lands, which has the status of “general repercussion”, meaning that the decision ruled in the case will guide future judicial decisions, legislative initiatives and even public policies on this issue.

Sônia Guajajara, Executive Coordinator of Apib, mediated the entire meeting directly from the Rise for the Earth Camp, which was established in Brasilia over a month ago and currently brings together about a thousand indigenous people who came from all regions of Brazil, even during the pandemic, to defend their rights. She informed the participants about the intense agenda of mobilizations planned for the coming months.

The Executive Coordinator of Apib, Dinaman Tuxá, also present at the meeting, shared with the international partners a broad vision of the violence and threats experienced by Indigenous Peoples in Brazil, which include constant attempts to invade their lands.

Towards an International Indigenous Mobilisation
Marielle Ramirez, an Apib collaborator, reinforced the importance of the support of international partners to strengthen the struggle of Indigenous Peoples in Brazil. “What we are proposing is more than the participation in a tweet, in a Petition: we propose a permanent articulation, which is constantly aware of the threats we live in Brazil”, said Sônia Guajajara.

Apib already has a strengthened network of partners around the world, and hopes to reinforce this network with the International Indigenous Mobilization through a series of meetings and political alignments that will intensify in July, such as dialogue with UN institutions, with Embassies and Diplomatic Representations in Brazil, among others.

If you or your institution wish to be part of this Mobilization and receive more information about Apib’s actions, please register by clicking here.