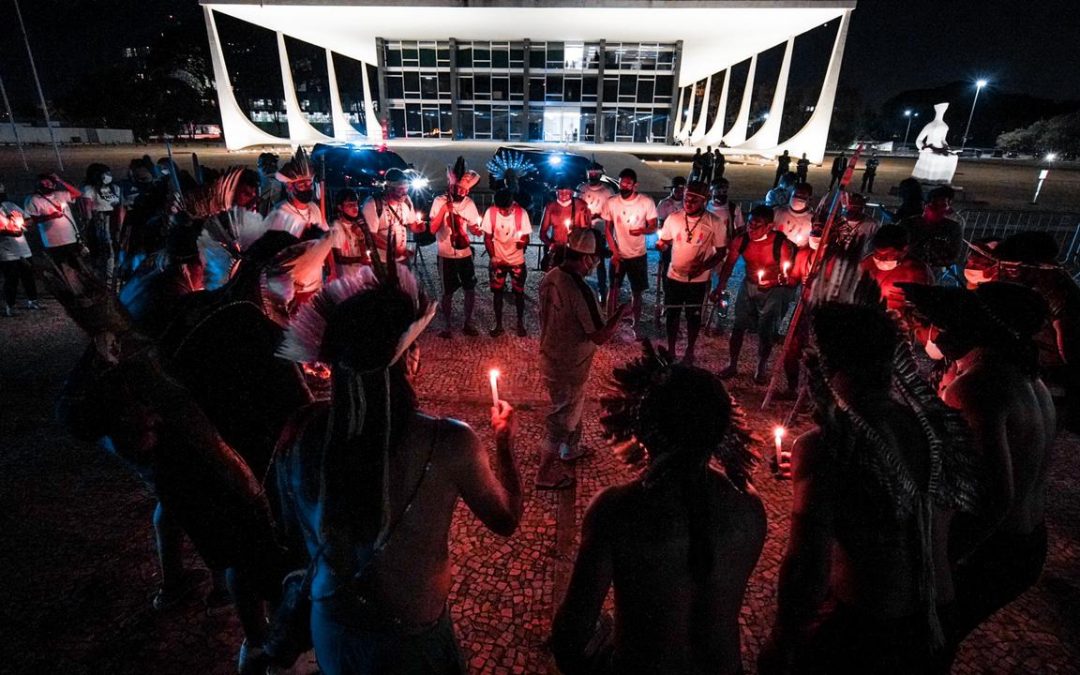 The Supreme Court will consolidate its legal interpretation on the rights of indigenous peoples over their lands. The Time Limit Trick is a pseudo-legal interpretative framework developed by political sectors to limit Indigenous land rights in order to enable the economic exploitation of Indigenous territories.

The Court will analyze the land repossession lawsuit filed by the state government of Santa Catarina against the Xokleng people, concerning the Ibirama-Laklãnõ Indigenous Land, where the Guarani and Kaingang peoples also live. In 2019, the Supreme Court applied the status of “general repercussion” to the suit, which means that the decision will serve as a guideline for the Brazilian federal government and all instances of Justice regarding demarcation procedures.

The ministers will also analyze the ruling of Minister Edson Fachin, of May 2020, which suspends the effects of Opinion 001/2017 of the Attorney General’s Office (AGU). The Opinion institutionalizes the so-called “Marco Temporal (Time Limit Trick),” among other issues, and has been used by the federal government to paralyze and even reverse the demarcation of Indigenous lands. In that same ruling, Minister Fachin suspended, until the end of the Covid-19 pandemic, all legal proceedings that could result in evictions of Indigenous groups in repossession suits or in the annulment of demarcation procedures. This decision must also be discussed by the court.

The Time Limit Trick is a pseudo-legal interpretative framework developed by political sectors – such as the agribusiness lobby – which seek to limit Indigenous land rights in order to enable the economic exploitation of Indigenous territories. In blatant opposition to the constitutional norms which enshrine Indigenous territorial rights, the “Temporal Mark” framework postulates that Indigenous peoples are only entitled to the lands they occupied on the date of the promulgation of the Brazilian Federal Constitution – i.e. October 5th, 1988.Alternatively, if they were not physically on the lands, they would need to have been part of a legal dispute or in a material conflict proven by the area on that same date.

In addition to contradicting the Brazilian Constitutional framework – which does not establish any temporal limitations to Indigenous land rights – this hypothesis is unfair, as it disregards expulsions, forced removals and all the violence Indigenous peoples have endured before the Brazilian Constitution was enacted. Furthermore, it ignores the fact that, until 1988, Indigenous groups were under the tutorship of federal government, and lacked the autonomy to file lawsuits in their own name.

The trial was previously scheduled for June 11, but was suspended after Minister Alexandre de Moraes requested the matter to be discussed in a separate, more detailed plenary session only one minute after the trial began. The other ministers didn’t even cast their votes. Nonetheless, the vote of the rapporteur, Minister Edson Fachin, was made public.

The trial will be broadcast on TV Justiça, with the presentation and debate on the votes. The trial is not expected to be concluded on that date or even in the special session, already scheduled for the following day,July 1, because ministers can ask to analyze the matter more carefully, taking it under advisement, suspending and postponing the session for an uncertain date.

The Ibirama-Laklãnõ Indigenous Land is located between the municipalities of Doutor Pedrinho, Itaiópolis, Vitor Meireles and José Boiteux, 236 km northwest of Florianópolis (SC). The area has a long history of demarcations and disputes, crossing the 20th century, during which it was drastically reduced. It was identified through studies by the National Indian Foundation (FUNAI) in 2001, and declared by the Ministry of Justice as belonging to the Xokleng people in 2003. They have never stopped claiming the right to their ancestral territory.

What do the participants in the proceeding say?

“The delay in demarcating indigenous lands is very troubling. Because, as time goes by, difficulties for the demarcation of land in Brazil increase. Indigenous peoples need to have their traditional rights acknowledged. And we would like the general repercussion to be ruled in our favor, and that we stop talking about a Time Limit Trick.”
Brasílio Priprá, one of the leaders of the Xokleng

“We expect the Supreme Court adopt a fairer, more reasonable interpretation that can help to enforce our rights. And that it no longer resorts, for example, to the temporal framework principle to limit the recognition of rights to us, indigenous peoples, which has been happening for the last ten years. But the Court can also strengthen our struggle in this confrontation with other powers, which use the Time Limit Trick as a criterion for the restriction of rights.”
Samara Pataxó, attorney for the Association of Indigenous Peoples of Brazil (APIB)

“The way the people lost their territory was the most violent, vilest, the most terrible. At the beginning of the last century, there was demarcation without technical criteria. In the 1920s, a significant part of the territory was lost. In 1950, the same thing happened. Afterwards, the construction of a dam took away the best lands. And in this context, the dispute of the Xokleng people takes place, so that the return of these stolen areas is in fact secured.”
Rafael Modesto, attorney for the Xokleng community and legal advisor to the Indigenous Missionary Council (CIMI).

Indigenous peoples from all regions of the country have mobilized against the Time Limit Trick principle. Since June 8, around 850 leaders from 50 peoples have been mobilized at the Rise for the Earth camp, in Brasília, against the advance of the anti-indigenous agenda by the Bolsonaro government and the rural bench in Congress.

“The camp is a call from the land to all peoples in Brazil, for us to show this genocidal who the true owners of the land are. We are in Brasília to guarantee our original rights and to say ‘stop genocidal Bolsonaro and his Machiavellian projects against the indigenous populations’,” says Kretã Kaingang, APIB’s coordinator.

Indigenous peoples in all territories have been mobilizing for weeks against the “evil package” that is being processed in the National Congress, such as Bill 490/2007, which opens indigenous lands to predatory economic exploitation and makes it impossible, in practice, that new demarcations be made. In the highway obstructions, rituals and prayers, the indigenous peoples also take a stand against the temporal framework principle, which seeks to restrict their constitutional rights.