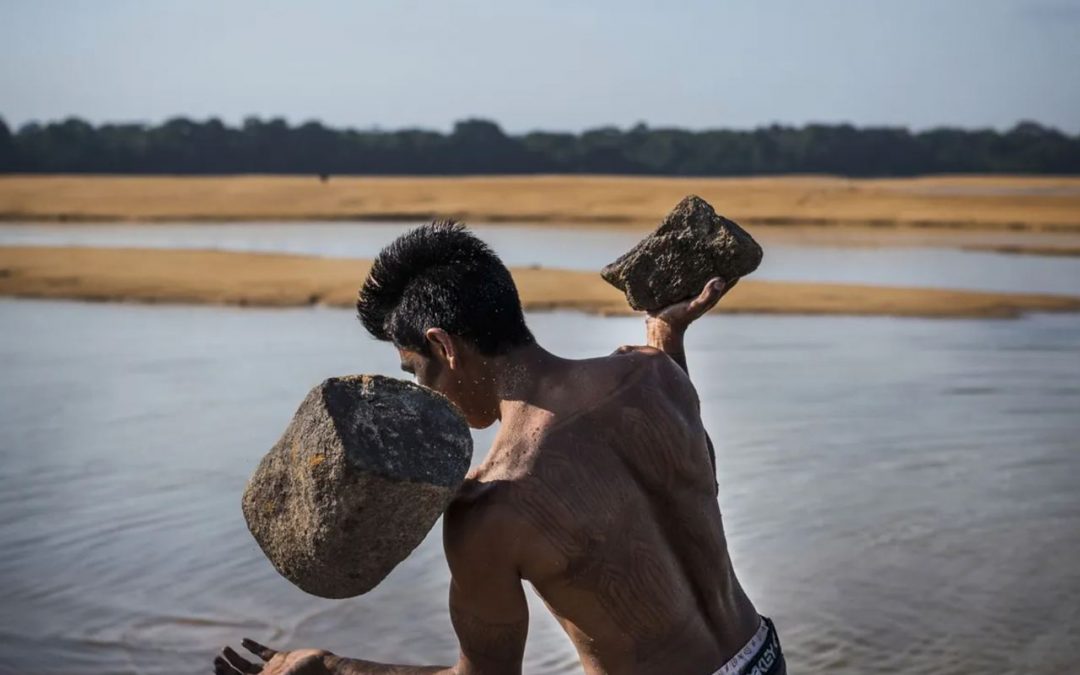 Pará, Brazil | July 13, 2021 – British mining company Anglo American has formally committed to withdraw 27 approved applications  to research minerals inside indigenous territories located in the states of Mato Grosso and Pará from the Brazilian National Mining Agency (ANM). The commitment was  informed on May 24, after pressure from the Munduruku people, the Association of Brazil’s Indigenous Peoples of Brazil (APIB), the Coordinating Body of Indigenous Organizations of the Brazilian Amazon (COIAB), and Amazon Watch.

Of the total applications filed by Anglo American, one of the largest mining companies in the world, and approved by the ANM, 13  directly impacted the Sawré Muybu Indigenous Land, which belongs to the Munduruku people, in southwest Pará.

According to Anglo American, ANM was informed of the withdrawal, and the company was waiting for the agency’s database to be updated. In its email response to APIB, the company states that, based on concerns raised by the organizations and the opposition of Indigenous groups against mining activities on their territories, it reconsidered these licenses and made the decision to withdraw all 27 of them.

“It is a victory, but we want to know if Anglo American will actually keep its word or if it will return to our territory by other means, as the government does by creating new regulations to get inside Indigenous territories. We are resisting and will continue to do so. We have been suffering countless threats — from a bill in Congress to loggers, miners, palm tree farmers, and land grabbers inside our own territory. So we don’t trust them; we will only do so if in two or three years’ time we can live in peace. Anglo American must keep its word because we don’t believe everything even if put on paper. The Constitution exists to be respected, but it is being violated and ripped to shreds,” says Alessandra Munduruku, deputy coordinator of the Federation of Indigenous Peoples of Pará (FEPIPA).

The campaign for Anglo American to withdraw  from all mining research applications that overlap with Indigenous territories started after APIB and Amazon Watch released Complicity in Destruction III: How Global Corporations Enable Violations of Indigenous Peoples’ Rights in the Brazilian Amazon in October 2020, which revealed that the mining company had almost 300 registered research applications overlapping 18 Indigenous Territories in the Amazon, some inhabited by Indigenous peoples living in voluntary isolation. The British mining company’s most recent target had been the Sawré Muybu, in the Middle Tapajós, home to the Munduruku people. Five applications were filed from 2017 to 2019.

Confronted with the data several times after the release of the report and by the campaign, Anglo American repeatedly took a stand and claimed it had given up all requests for mineral exploration in areas located on Indigenous lands in Brazil. However, a July 2021 survey conducted by InfoAmazonia’s Mined Amazon project shows that Anglo American still has 86 active mining interests in the ANM database that impact Indigenous territories.

“The decision by Anglo American is important, and a direct result of Indigenous peoples’ resistance to mining in our territories. But this decision is not enough. We cannot ignore that the mining company still has dozens of requests for mineral exploration that affect other Indigenous territories. This is why we will remain strong with our initial call to Anglo American: to publicly commit not to mine on any Indigenous land in Brazil. The majority of the Indigenous peoples and communities in Brazil do not share the desires of a minority of Indigenous individuals who are deluded and yield to the covertly evil intentions of this administration,” said Eloy Terena, APIB’s legal coordinator and COIAB’s legal advisor.

Over the past two years, under far-right president Jair Bolsonaro, Brazil has set a new record of mining applications within Indigenous lands. According to a 2020 survey carried out by Amazônia Minada, a total of 143 mining applications that overlap Indigenous lands were filed, and not rejected, at the ANM — the highest amount in the last 24 years, and nearly three times as much as those filed in 2018, the year after which Bolsonaro took office. A slew of applications followed after Bolsonaro introduced Bill 191 in February 2020, which provides for the regularization of mineral exploration on Indigenous lands, thus fulfilling one of his most controversial campaign promises. Even more worrying, 71 of the 143 applications filed in 2020 overlapped lands where the Brazilian National Indigenous Foundation (FUNAI) has records of isolated Indigenous peoples.

In the Yanomami IT alone, the Brazilian Indigenous land with the largest area formally requested for mining, around 3.3 million hectares (34.3% of the IT’s total area) are slated for mineral extraction across 500 applications filed at the ANM — an area larger than Belgium (3 million hectares) or the state of Alagoas (2.7 million hectares) is being disputed with miners. Almost a third of these applications concern gold mining. Over the past two months, Yanomami communities have been subjected to sustained attacks by illegal miners.

“The companies that continue to file these requests, even though they are aware of the conflicts mining has created inside Indigenous territories, are contributing to the ruinous project carried out by the Bolsonaro administration. With the threat of Bill 191/2020 drawing nearer, we will continue our campaign against mining giants, such as Anglo American, to show their commitment or lack of indigenous rights and take a stand against this bill,” says Rosana Miranda, Amazon Watch’s campaign consultant.