UNPRECEDENTED: APIB denounces Bolsonaro before the ICC, in The Hague, for indigenous genocide 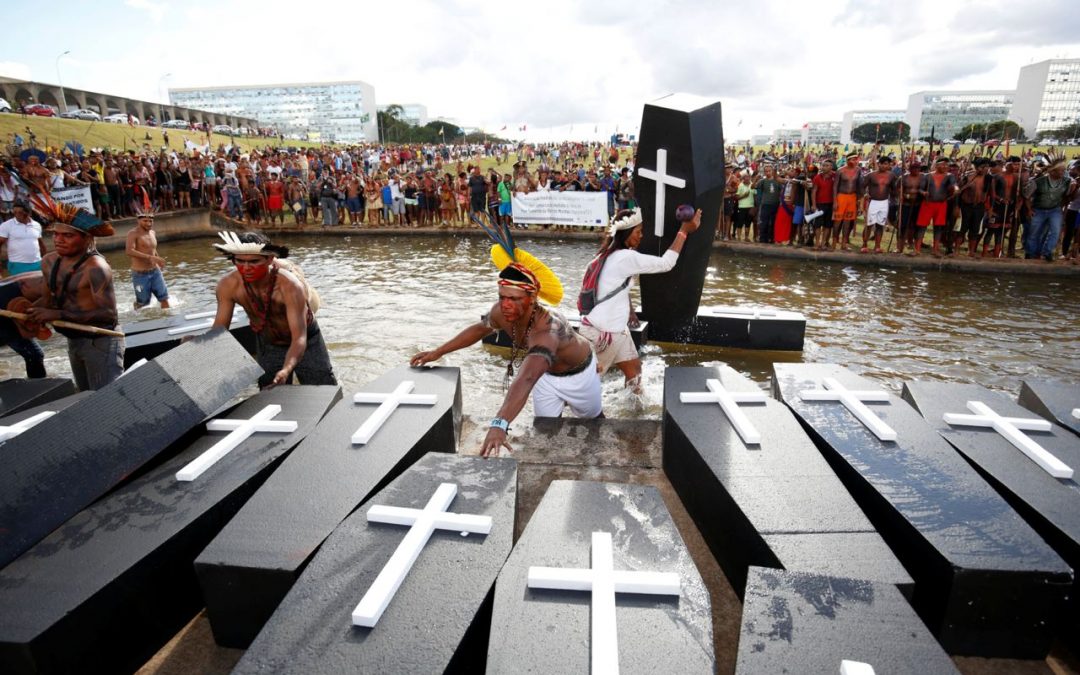 For the first time in history, Indigenous Peoples address directly the court in The Hague, with their own lawyers, to stand up for their rights.

Brasília, August 9, 2021 – The Articulation of Indigenous Peoples from Brazil (Apib) filed, this Monday (9), a statement before the International Criminal Court (ICC) to denounce Bolsonaro’s government on Genocide. On the date that marks the International Day of Indigenous Peoples, the organization requests the Court’s prosecutor to examine the crimes perpetrated against indigenous peoples by President Jair Bolsonaro since the beginning of his term, in January 2019, with special attention over the period of Covid-19 pandemic.

Based on ICC’s precedents, Apib demands an investigation for crimes against humanity (article 7. b, h. k Rome Statute – extermination, persecution and other inhuman acts) and genocide (art. 6. B and c of the Statute of Rome – causing severe physical and mental damage and deliberately inflicting conditions aimed at the destruction of indigenous peoples). For the first time in history, indigenous peoples stand before the ICC, with the support of indigenous lawyers, to defend themselves against these crimes.

The statement is composed by several complaints from indigenous leaders and organizations, official documents, academic research and technical notes, arriving to prove the planning and execution of an explicit, systematic and intentional anti-indigenous policy headed by Bolsonaro.

“We believe there are acts in progress in Brazil that constitute crimes against humanity, genocide and ecocide. Given the inability of the justice system in Brazil to investigate, prosecute and judge these conducts, we denounce them to the international community, throughout the International Criminal Court”, highlights Eloy Terena, legal coordinator of Apib.

According to an excerpt of the communication, “the dismantling of public structures for social and environmental protection, and also of those addressed to protecting Indigenous Peoples resulted in the escalation of invasions in Indigenous Lands, deforestation and fires in Brazilian biomes, and also increased illegal mining in the territories.”

For APIB, attacks against Indigenous Peoples and their territories were encouraged by Bolsonaro several occasions along his term. The facts that evidence the Federal Government’s anti-indigenous project range from the explicit refusal to demarcate new lands, including bills, decrees and ordinances that try to legalize invasive activities, stimulating conflicts.

“Apib will continue to stand up for the right of Indigenous Peoples to exist in their diversity. We are native peoples and we will not surrender to extermination”, emphasizes Eloy, one of the eight indigenous lawyers who signed the statement.

The complaint statement sent to the ICC, was supported by the Collective of Advocacy on Human Rights – CADHu and the Comissão Arns, which filed, in 2019, another statement to the ICC Prosecutor’s Office against Bolsonaro, currently under review in the court.

“We have been fighting every day for hundreds of years to ensure our existence and today our fight for rights is global. The solutions for this sick world come from indigenous peoples and we will never remain silent in the face of the violence we are suffering. We sent this communiqué to the International Criminal Court because we cannot fail to denounce Bolsonaro’s anti-indigenous policy. He needs to pay for all the violence and destruction he is leading”, says Apib’s executive coordinator, Sonia Guajajara.

According to the coordinator, the month of August will be marked by mobilizations from indigenous peoples fighting for their rights. She highlights the ‘Struggle for Life’ camp, scheduled to take place between August 22nd and 28th, in Brasília. “We will occupy the federal capital once again to prevent setbacks against the rights of our peoples”, reinforces Sonia.

“We alert the International Criminal Court to the authoritarian escalation underway in
Brazil. The democratic environment is under risk”, says Dinamam Tuxá, executive coordinator for Apib, recalling the bills that are under Brazilian National Congress analyse and represent serious threats for indigenous rights, and also the judgment by the Supreme Court (STF) on the Temporal Mark, that can define the future of indigenous peoples.

“We are calling to action in Brasília, in the midst of a pandemic, because today the Federal Government’s anti-indigenous agenda represents a more lethal threat than the Covid-19 virus. The lives of Indigenous Peoples are linked to their territories and our lives are under threat. We will be mobilized in the communities, in the cities, in Brasília and in the court in The Hague to hold Bolsonaro accountable and fight for our rights”, highlights Tuxá.

“Indigenous Peoples will remain vigilant, as they have historically done. It is the duty of the Brazilian federal government to respect them, as a foundational expression of a Constitutional State of Law”, points out an excerpt of the document sent to the ICC.