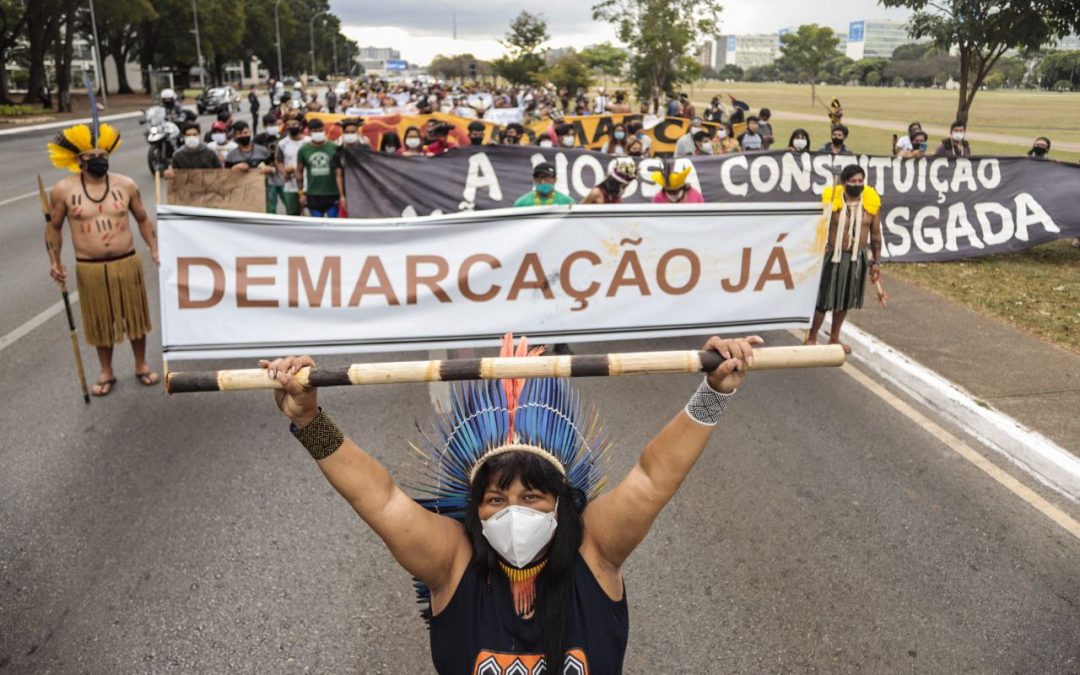 Mobilization calls for indigenous people already vaccinated and counts with health protocols against Covid-19, in Brasilia

The Articulation of Indigenous Peoples of Brazil (Apib), associated with all its regional organizations, inaugurates this Sunday (22) the national mobilization ‘Struggle for Life’, in Brasília. The activities, which will last until the 28th of August, intend to defend the indigenous peoples rights and to promote activities against the anti-indigenous agenda that advances into the National Congress and the Federal Government. The mobilization will also focus on the trial about the Milestone Thesis (Marco Temporal) by the Brazilian Supreme Court (STF), which is expected to be resumed on August 25th and may define the future for indigenous land demarcation.

The indigenous movement constantly denounces the increase of violence against indigenous peoples inside and outside their traditional territories. Apib and all its regional grassroot organizations disseminate this information to the press, on social media and formalized complaints in national and international legal instances. On the date that marks the International Day of Indigenous Peoples, August 9, Apib presented an unprecedented statement before the International Criminal Court (ICC) to denounce Bolsonaro’s government on the crimes of Genocide and Ecocide.

“We cannot remain silent while facing this violent scenario. It is not only Covid19 virus that is killing our people and that is why we decided once again to go to Brasília to continue fighting for the lives of indigenous peoples, for the Mother Earth and for the future of humanity”, emphasizes Sonia Guajajara, one of Apib’s executive coordinators.

The mobilisation previews seven days of activities in the federal capital, with an intense schedule of plenary sessions, political audiences within Federal Government bodies and embassies, marches and public demonstrations. During this period, indigenous people from all regions of Brazil will be camped at Praça da Cidadania.

The camp will have an intense program of political discussions and cultural events. All activities have a collaborative communication team formed mostly by indigenous people. “It is necessary to give visibility and amplify the voices of the indigenous movement as a whole. In this scenario of many threats, communication plays a key role and we will be joining forces in this camp”, emphasizes Erisvan Guajajara, Media India coordinator.

The Struggle for Life Camp has developed sanitary protocols dedicated to reinforcing all existing and recommended norms for combating Covid19. The camp’s health team includes indigenous professionals and count on the support of the Brazilian Association of Collective Health (Abrasco), the Oswaldo Cruz Foundation, the Indigenous Health Clinic of the University of Brasília (Asi/UNB) and the University Hospital of Brasília (HUB).

“The health recommendations begin from the moment the delegations organize themselves to leave their territories. Apib proposes the invitation of people who already have their full vaccination coverage,” explains Dinamam Tuxá, one of Apib’s executive coordinators.

The first day of the camp (22) is dedicated to the arrival of the delegations and to carry out mass testing for Covid-19 as one of the sanitary protocols for the mobilization.

On Monday (23) the activities are dedicated to political updates with leaders across the country. ‘The Five Powers’ is the name of the plenary that will be held to promote an analysis of the current situation on the legislative, executive, judiciary, popular and spiritual powers. On this day, rituals and audiovisual exhibitions are also planned.

The most central agenda of the Struggle for Life mobilisation is related to the trial by the Brazilian Supreme Federal Court (STF), which is expected to be the most important process of the century for the lives of indigenous peoples. The Court will analyze the repossession action filed by the government of Santa Catarina against the Xokleng people, referring to the Ibirama-Laklãnõ Indigenous Land (TI), where the Guarani and Kaingang peoples also live.

Under the status of “general repercussion”, the final decision made by the trial will serve as a guideline for the federal government and all instances of Brazilian justice system, as well as a reference to all processes, administrative procedures and legislative projects regarding the indigenous land demarcation procedures.

“Indigenous peoples experience a deeply adverse political context under Bolsonaro’s administration, the first president elected with a declared position against the indigenous peoples. As soon as he started his government, he signed several acts that hurt the Constitution and International Treaties that protect indigenous communities and their territories. It is important to note that, in this context of pandemic, it is essential to reflect on the relevant role the traditional territories play to keep humanity’s equilibrium. So, the indigenous lands, besides protecting the indigenous peoples’s ways of life, are a national and public heritage, which contributes to keep the climatic balance”, emphasizes Eloy Terena, Apib’s juridic coordinator in his article on the Supreme Court judgment (read the full text here)

In this sense, the schedule for the Struggle for Life camp on August 24th and 25th is dedicated to discussions, acts and manifestations related to the trial, in support of the Supreme Court justices and against the Milestone Thesis (Marco Temporal).

The days following the trial will give space to debates related to the 2022 elections and the strengthening of the support networks for the struggles of indigenous peoples. The departure of all delegations is scheduled for the 28th of August.

Check out some schedule details here