On its second day, the Struggle for Life Camp had plenary sessions, spiritual ceremony and an intense international agenda 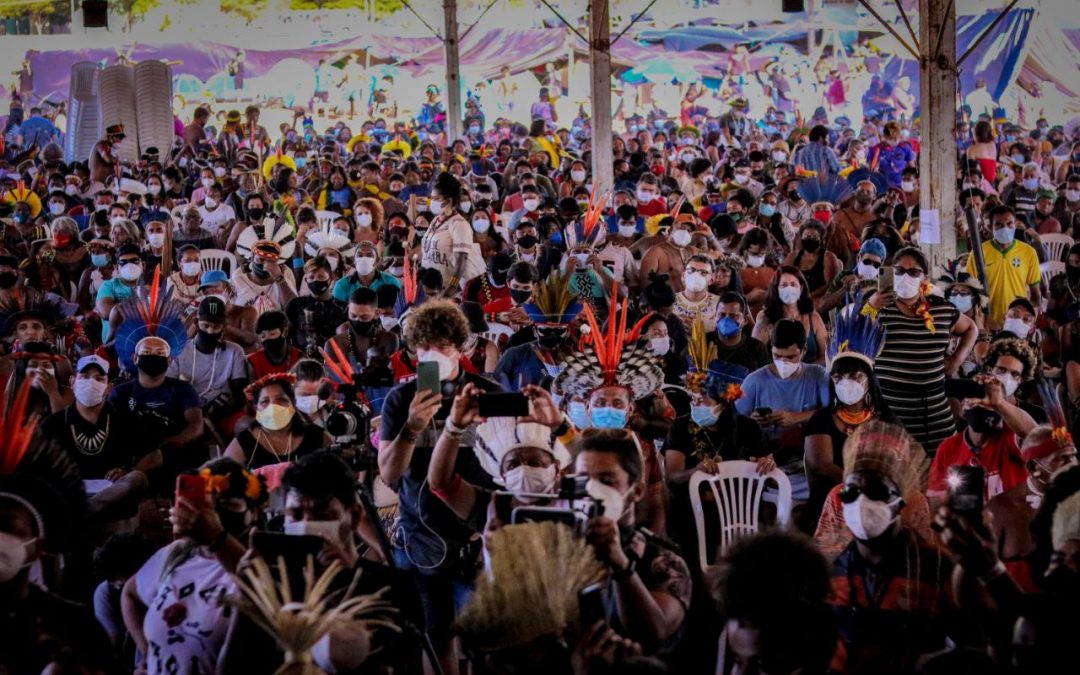 More than 5,000 indigenous people from all regions of Brazil are gathered in Brasilia to claim their rights

The second day of the Struggle for Life Camp began with the presentation of the indigenous delegations gathered in the camp. At this moment, more than 4,000 indigenous people, from 117 peoples from all regions of Brazil, are present at the Esplanada dos Ministérios, in Brasília. This morning, in a presentation of indigenous cultures, the delegations had the opportunity to exhibit their traditional dances and songs, reinforcing the cultural ancestry shared between the peoples.

“It is also important to highlight that our camp has developed a series of health protocols, dedicated to reinforcing existing WHO norms, as all indigenous people who are in the camp must be vaccinated, obligatorily, in order to be able to accompany our camp. We feel pushed to be present in Brasilia, in this very desolate scenario that is being promoted both by the National Congress, but mainly by the Federal Government regarding the rights of indigenous peoples. From the 22nd to the 28th of August, in Brasília, we will fight for the rights of indigenous peoples, mainly guaranteeing the well-being of our territories.” Dinamam Tuxá, Coordinator of the Articulation of Indigenous Peoples of Brazil.

Indigenous Peoples of Brazil Receive International Support
The camp was visited by a Progressive International delegation, an articulation that brings together human rights organizations, political parties, unions and other institutions from the progressive field from several countries. The delegation was welcomed by representatives of the Munduruku and Kayapó peoples, who took advantage of the meeting to denounce the impacts they are facing due to infrastructure projects close to their lands.

Apib’s representatives delivered copies of the International Dossier released last week to serve as an instrument of denunciation for the international community, the document brings a series of complaints about the threats and violence perpetrated by the Government of Bolsonaro against Indigenous Peoples.

Also today, a delegation from Apib was invited to visit the Norwegian Embassy, ​​where they were able to deliver the International Dossier and demand support for their struggle from Ambassador Nils Martin Gunneng, and from the program officer, Mr. Kristian Bengston.

“Accepting a timeframe doctrine would result in a significant denial of justice for many indigenous peoples who seek recognition of their traditional land rights. According to the Constitution, indigenous peoples have the right to permanent possession of the lands they traditionally occupy”, said Francisco. This statement reinforces the relevance and need to defend the right of Indigenous Peoples to their territories.

Plenary of the Five Powers
At 3 pm, the Plenary of the Five Powers will take place, which will be held to promote an analysis of the situation on the legislative, executive, judiciary, popular and spiritual powers. In the evening, the Indigenous Peoples will be gathered to celebrate a Pajelança: a religious ritual to reinforce the alliance of the Peoples. After the ceremony, Mídia Índia (@midiaindia) will exhibit the video screening: “Memory and Fight”.

“This plenary talks about the five powers and is very important within the Struggle for Life camp, giving it a great meaning because it passes through the discussion of the legislature, the judiciary and the executive, and it also reminds us of the fourth power, which are the masses, which is the people, the Brazilian nation as a whole, not only the indigenous peoples, but the Brazilian people, which is the fourth power. And then we talk of the fifth power, being the spiritual one. The divinities rules our lives, rules the communities, gives strength in times of difficulty and in the face of invasion, miners, loggers, against bills and ordinances, against all human ailments and spiritual, also against the pandemic and the diseases” Marcos Sabaru, Assessor policy of Apib.