Milestone thesis No! What is it anyway? 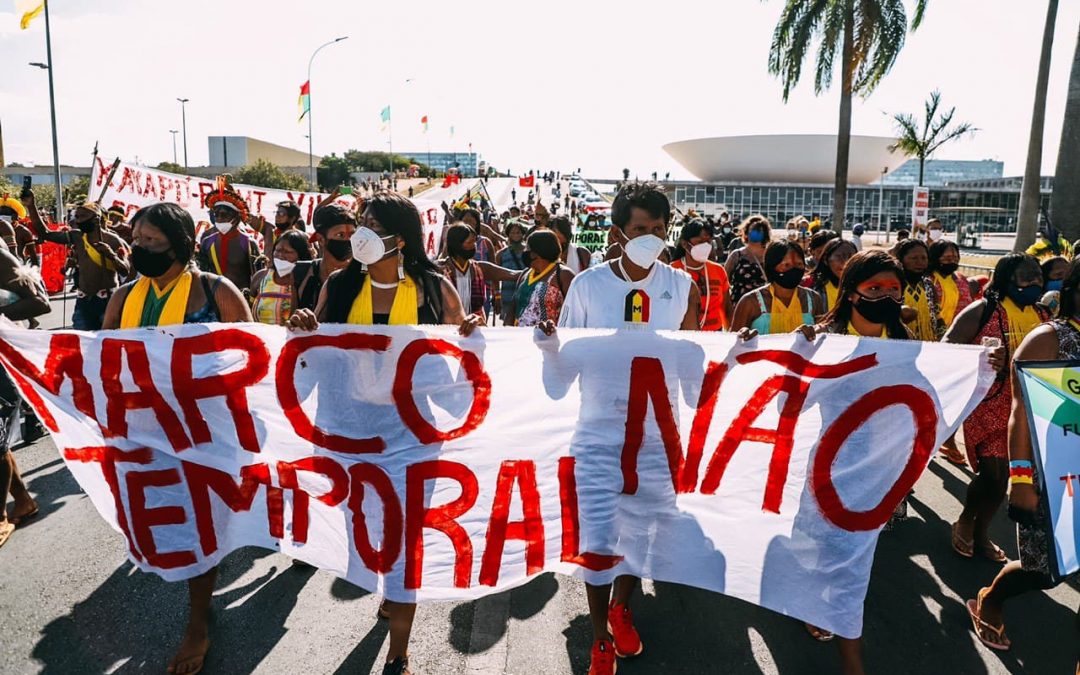 On the day the Federal Supreme Court (STF) resumes the trial that will define the future of the demarcation of indigenous lands in Brazil, understand once and for all what the Milestone thesis is

Today, the Federal Supreme Court resumes the trial of the Xokleng case, in an Extraordinary Appeal filed by the Government of Santa Catarina. What is in the hands of the 11 ministers of the STF is the future of the demarcation of indigenous lands in Brazil. This is because the main issue involved in this judgment is the Temporal Framework, a thesis that also permeates some bills being voted on in the National Congress.

Indigenous peoples have been repeating for quite some time that, if validated, the Milestones thesis could seriously compromise the process of demarcation of indigenous lands in Brazil, and even serve as an excuse to cancel demarcation processes that have already been concluded.

But after all, do you know what the Milestone Thesis (Marco Temporal) is?

The Milestone thesis is a legal thesis that restricts the constitutional rights of indigenous peoples. In this interpretation, defended by ruralists and sectors interested in the exploitation of traditional lands, the indigenous peoples would only have the right to demarcation of the lands that were under their possession on October 5, 1988 – the promulgation date of the Brazilian Constitution. Alternatively, if they were not in possession of the land, they would have to prove the existence of a judicial dispute or material conflict on the same date of 5 October 1988.

The thesis is perverse because it legalizes and legitimizes the violence to which the peoples were subjected until the promulgation of the 1988 Constitution, especially during the Military Dictatorship. Furthermore, it ignores the fact that, until 1988, the indigenous peoples were under the guardianship of the State and did not have the autonomy to judicially fight for their rights. For all these reasons, the indigenous peoples have been saying in demonstrations and mobilisations: “Our history does not begin in 1988!

Why is the STF debating this issue today?

The debate on the Milestone thesis arrived at the STF as a thesis presented by the Government of Santa Catarina in the Extraordinary Appeal (RE) 1.017.365. The object of the case is a repossession suit filed by the Environmental Institute of Santa Catarina (IMA) against the National Indian Foundation (FUNAI) and the Xokleng indigenous people, involving an area claimed by the Ibirama-Laklanõ Indigenous Territory. The territory in dispute was reduced throughout the 20th century and the indigenous people have never stopped claiming it. The area has already been identified by anthropological studies by Funai and declared by the Ministry of Justice as part of their traditional land.

Why is this trial central to the future of indigenous peoples in Brazil?

In a decision on 11 April 2019, the plenary of the STF unanimously recognised that this case has “general repercussion” status. This means that the decision made in that case will serve to fix a reference thesis for all cases involving indigenous lands, in all instances of the Judiciary from now on.

And does this decision affect many people?

Besides the peoples that inhabit the Ibirama-Laklanõ Indigenous Lands, the object of the lawsuit, this decision will impact dozens of land demarcation cases and territorial disputes over Indigenous Lands that are currently in the courts. There are also many legislative measures that seek to remove or relativize the constitutional rights of indigenous peoples. By admitting the general repercussion, the STF also recognises that there is a need for a definition of the theme.

What is at stake?

Ultimately, what is at stake is the recognition or denial of the most fundamental right of indigenous peoples: the right to land. Indigenous peoples have an interdependent relationship with their lands, as their cosmologies link their very existence to the connection with the land. Furthermore, it cannot be ignored that those who defend the Milestone thesis intend, in reality, to expel the original occupants of the lands in order to destroy and exploit them to exhaustion. And this directly impacts the ecological and climatic balance of our country and world.

What consequences could this trial have for the indigenous peoples?

If the STF reaffirms the original character of indigenous rights and, therefore, definitively rejects the thesis of the temporal milestone, hundreds of conflicts throughout the country will have a path open to their solution, as well as dozens of lawsuits could be immediately resolved. The 310 indigenous lands that are stalled at some stage in the demarcation process would, in theory, no longer have any barriers for their administrative processes to be concluded.

On the other hand, if the STF opts for the anti-indigenous thesis of the temporal milestone, it will end up legalising the usurpations and violations that occurred in the past against the indigenous peoples. In this case, a flood of other decisions annulling demarcations can be foreseen, with the consequent rise of conflicts in pacified regions and the worsening of conflicts in areas already under attack.

This decision could also encourage a new process of invasion and dispossession of demarcated lands – a situation that is already underway in various regions of the country, especially in the Amazon region.

In addition, there are references to isolated indigenous peoples who have not yet been confirmed by the State, that is, they are still being studied – a lengthy procedure, due to the non-contact policy. If the time limit of 1988 is approved, many lands of isolated peoples will not be recognized, opening up the possibility of the extermination of these peoples.