Nothing justifies the fat eyes over our lands 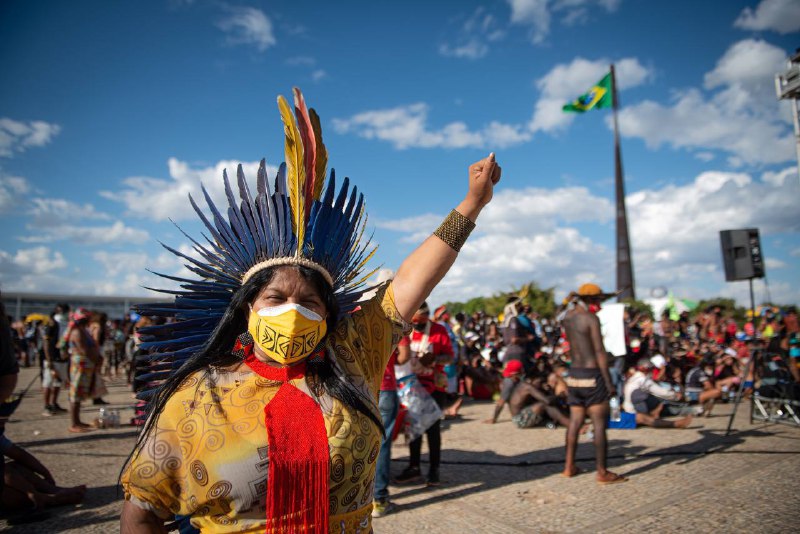 “Narrative”, the favorite word of president Jair Bolsonaro’s followers, is defined by the dictionary as a “prose text whose characters figure fictional, imaginary situations”. And it defines the badly said speech delivered by Bolsonaro last week about the trial of the Milestone thesis (Marco Temporal) by the Brazilian Supreme Court: “If the understanding of the past changes, we will immediately be  to demarcate, by judicial force, another area equivalent to the Southeast region as indigenous land. Agribusiness is over”. How is it possible to fit so much fiction into just two sentences?

Ruralists even paid full-page advertisements on newspapers to help promote the presidential delusion; but, in the real world, if the Supreme Federal Court decides to bury it once and for all, it will not be modifying any “past understanding”. In fact, it was the Federal Attorney General’s Office (AGU) who did that, during the Michel Temer (MDB) government, when it issued opinion 001/2017.

The Milestone thesis (Marco Temporal) — which determines that only indigenous peoples who were already occupying their lands on the date of promulgation of the Constitution in 1988 could claim possession of those lands – was not provided for by law. The AGU used the vote of former minister Ayres Britto in the trial on the ratification of the Raposa Serra do Sol Indigenous Territory (TI) to justify its position.

In 2009, the court had ruled that the Indigenous Land should be demarcated “on an continuous territory”; therefore, non-indigenous possessions would figure outside the delimited area. Only Britto’s vote makes a precise mention of the time frame. The Supreme Court was called again, in 2013, to judge appeals against the decision. And, in addition to reinforcing the precedent decision, it determined that it would not have binding effect. In fact, the thesis was not even applied in the Raposa Serra do Sol process, since there were non-indigenous possessions within the limits of its territory that dated from the beginning of the 20th century and were annulled. This is not history, it is historical fact.

Indigenous protest against changings in the policy of land demarcations

Bolsonaro promised that Brazil would return to what it was 50 years ago, but the approval of the milestone thesis would make the country retrocede to the colonial period. A permission act of April 1st, 1680, sanctioned by the law in 1775, already established that  in “land granted to private individuals, the rights of indigenous, its primary and natural lords, would always be reserved”. The president will also not be required to do anything “immediately”: the article 67 of the Transitional Provisions Act of the 1988 Constitution prior to a period of five years for all Indigenous Lands to be demarcated. The state is already 28 years late.

Today, indigenous lands occupy 13.8% of the national territory. It seems a lot, but the proportion is lower than the world average: 15%, according to a study published in the magazine “Nature Sustainability”. If compared to the area occupied by rural properties, we lose by far: 41%. There are 421 Indigenous Lands already approved, totaling 1,066 million km² and 303 in the demarcation phase, or 110,000 km². More than 600,000 people live into them. Meanwhile, 51,200 latifundios, or 1% of the properties, occupy 20% of Brazil, according to data extracted from the Diário Oficial da União, IBGE, Funai, Instituto Socioambiental and the MapBiomas project.

Also for comparison purposes, the Ibirama-La Klãnõ Indigenous Lad, claimed by the Environment Institute of Santa Catarina, whose judgment has been declared as “general repercussion” by the Brazilian Supreme, has 370 km² and 2,057 indigenous people depending on it; the Fazenda Nova Piratininga, in Goiás, which belongs to three businessmen, occupies 1,350 km²

There is nothing to justify the fat eyes over our lands: only in the Amazon, there are 510,000 km² of unallocated area, which can be used for production. Indigenous Lands are essential to contain deforestation – only 1.6% of the loss of native vegetation in the country occurred within their limits between 1985 and 2020 – and they store 28.2 billion tons of CO 2 in the Amazon, 33% of the total.

Without indigenous lands, the planet will heat up and the sky will stop raining. We are not the ones who can end agribusiness, but the agribusiness can do it by itself.