APIB TOURS THROUGH EUROPE TO REPORT THAT MEAT, SOYBEAN, LEATHER AND GOLD PURCHASED BY EUROPEAN COUNTRIES LEAVE A TRAIL OF DESTRUCTION IN BRAZIL’S INDIGENOUS LAND 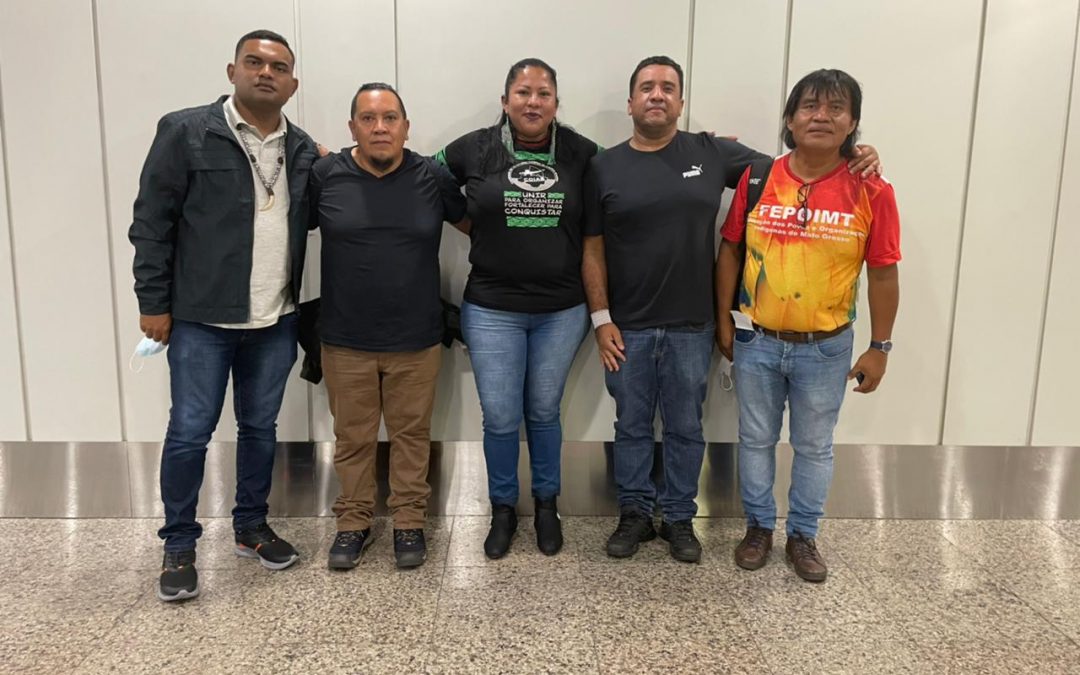 Indigenous leaders from Brazil visit France and Belgique during the month of June as a strategy to hold governments and companies accountable for threats to the protection of their territories, as well as to reinforce the complaint at the International Criminal Court (ICC) against the Bolsonaro government for Genocide and Crimes against Humanity.

The Articulation of Indigenous Peoples of Brazil (APIB) visits Paris and Brussels from June 8th to 16th 2022 as part of its strategy to confront the genocidal and ecocidal policies of the Bolsonaro government. Its objectives are to affect the chains of extraction of products, such as gold, and the production of raw materials such as meat, soybean and leather, consumed in Europe and which leave a strong impact on the Indigenous Lands of Brazil. For this, the indigenous delegation will meet with Commissions of the European Parliament to participate in the debate on the legal proposal about a Regulation on deforestation-free products (FERC). Among the various activities, APIB is going to meet with the Brazilian delegation of the European Parliament and with the parliamentary Environmental Department, both on June 14, and with members of the German Green Party on June 15. These events are of great importance as Europe is the second largest market buying soybean produced in Brazil and a big importer of Brazilian beef.

Also during the International Tour, APIB will accompany the acts and investigations of the French supermarket group Casino suspected of lack of traceability of certain products from deforested lands or land grabbing in Brazil. The International Tour is an independent action, which is not linked to any political party or company, organized by APIB to promote political advocacy for the rights of indigenous peoples. Seven indigenous leaders, representing all regions of Brazil, cross the ocean to denounce international threats to their territories and demonstrate that their struggles go beyond Brazilian borders.

“We need urgent international action in the face of the institutional instability scenario that we are experiencing today in Brazil. A scenario promoted by hate speech, with an incidence of the Executive within the Legislative, with action or omission of the Brazilian State that promotes the invasion of indigenous lands and that weakens the institutions that should guarantee the rights of indigenous peoples, mainly FUNAI, ICMbio and Ibama. The institutions are being dismantled, with a significant increase in violations on indigenous lands with the advance of mining, illegal logging and the implementation of large enterprises without respecting biodiversity and the specificities of indigenous peoples”, explains Dinamam Tuxá, Executive Coordinator from APIB.

In March 2021, indigenous organizations from Brazil and Colombia, together with a group of French NGOs, sued the retailer Casino, which owns the supermarket brands Casino, in France, Pão de Açúcar, in Brazil, and Éxito, in Colombia. The evidence presented points to a pattern of products linked to deforestation and land grabbing in Brazil and Colombia.

“We are taking action on the Casino case because, as has been shown, it purchases products from deforestation and socio-environmental conflicts. These large groups that purchase commodities in Brazil must respect the principles of traceability, as many of these products come from areas of socio-environmental conflict, encourage deforestation in the Amazon and end up violating the rights of indigenous peoples”, says Dinamam Tuxá.

The proposed Regulation on deforestation-free products (FERC), launched in November 2021 and which will be debated and voted on by the European Union, has a direct impact on the security of indigenous lands and the biomes that these people protect. The regulation will have to define a date on which it will be prohibited to sell products that have evidence of illegal deforestation in the production chains of risky products.

The law provides for regulations on commodities (meat, leather, wood and other products) arising from deforestation and/or forest degradation, but it still has loopholes as it does not recognize mining products, soybean and frozen meat. Furthermore, the law recognizes as risky commodities only those produced in forests following FAO’s deffinition, which excludes ecosystems such as Cerrado, Caatinga, Pantanal, Pampas and others. The measure, which seeks to require foreign importers to monitor the supply chain, excludes a good part of natural environments that are at high risk of destruction and does not specifically consider the negative impacts on indigenous peoples who suffer the consequences of productive and extractive activities.

Mining in Indigenous Lands: the struggle to legalize a predatory activity with indigenous peoples and the environment

The European mechanisms for regulating the gold market only consider certain countries with recognized conflicts to be traceable, but Brazil is not included despite being one of the main exporters of gold extracted from illicit mining in Indigenous Lands or with impacts both environmental and health in indigenous peoples. In Brazil, there is a lack of control over the traceability of gold production, according to a study carried out by the Environmental Services Management Laboratory (UFMG) together with the Federal Public Ministry. The gold declarations in the Financial Contribution for the Exploration of Mineral Resources from 2019 to 2020 showed that only one third of the gold corresponded to the declared origin, with another third being clearly illicit and last third it was not possible to verify its origin.

From 2010 to 2020, the area within indigenous lands occupied by mining grew by 495%, according to data from Map Biomas. Even though the violent consequences of the installation of mining in indigenous lands have been verified, the Brazilian Congress, pressured by President Jair Bolsonaro, intends to legalize such activity with Bill 191/2020. Also, the proposal of Bill 490/2007 pretends to paralyze the demarcations and review Indigenous Lands already demarcated, and the Bill 510/2021 intends to legalize the land grabbing. These are some measures that constitute an anti-indigenous agenda in the National Congress.

“We are going to talk to the European Parliament in order to bring up this concern of institutional instability in Brazil, our democracy is very fragile. We need to try to get the countries of the international scenario to intercede in the Brazilian Parliament in order to put some pressure on them in order to avoid the approval of those Bills violating our rights. In addition, certain trade agreements between Brazil and the European Union can increase deforestation in the Amazon and, in particular, violence against indigenous peoples in all Brazilian biomes”, explains Dinamam Tuxá.

In addition to the legislative threats, the President of Brazil has been carrying out his threats: while campaigning in 2018, he said that he would not demarcate any millimeter of indigenous land and so far all demarcations are paralyzed. The right to recognize and demarcate areas traditionally occupied by indigenous peoples runs the risk of being extinguished if the temporal milestone of PL 490, also known as Marco Temporal, is incorporated into the law by the Federal Supreme Court of Brazil. This Bill is one of the main attacks by the Legislative Power on the rights recognized to indigenous peoples in the Federal Constitution of 88 and APIB considers it an “attempted genocide”.

The trial, which began in 2021, was postponed for the third time on June 5th. The session was scheduled for June 23rd 2022 and APIB was preparing to occupy Brasília for the trial. (Read more about the postponement of the Timeframe vote).

“As much as we became aware of the possibility of suspending the judgment of the time frame thesis on the 23rd, this means a lot beyond postponement. This is also a reflection of the political pressure caused by this conjuncture and by a speech of structural and institutional racism promoted by the executive headed by the President of the Republic Jair Bolsonaro. It forces us to make advocacy campaigns within an international scenario to prevent these violations. The institutions of Brazil are being silent and the only actions that are being promoted are mainly focused on the withdrawal and violation of our rights”, says Dinamam Tuxá.

Aims of the awareness campaign across Europe

The benefit of protecting indigenous territories is not just for their own peoples: Indigenous Lands are a guarantee of the future for humanity. Therefore, everyone must be responsible for protecting these territories. The relationship with the territory is not one of ownership, exploitation, expropriation or appropriation, but of respect and management of a common good, which serves all humanity. However, the survival of indigenous peoples remains under constant threat. The pressure for deforestation in indigenous territories is intense, through invasions, mining, agricultural expansion and other illegal activities, putting indigenous people’s lives at risk.

We aim for the European Union, as a major consumer of Brazilian agricultural commodities and one of the largest buyers of gold in Brazil:

– take responsibility for their production chains
– impose measures and restrictions to ensure that products imported into European countries do not contain the blood of indigenous peoples
– join the struggle of indigenous peoples and put pressure on the Brazilian government to establish emergency measures to eliminate the genocide of its peoples.
About the Articulation of Indigenous Peoples of Brazil (APIB)
APIB is the largest instance of representation of the Brazilian indigenous movement and has, since its creation, fulfilled its commitment to fight for the guarantee of the constitutional rights of Indigenous Peoples. Whether nationally or internationally, APIB and its seven grassroots organizations are mobilized to protect territories, communities and people.
The Indigenous Peoples, articulated through their regional organizations and APIB, seek in all instances the accountability of those responsible for this destruction. Internationally, APIB, in addition to participating in climate events and debates, seeks to make the agents responsible for the dynamics of invasion, illegal exploitation and destruction of indigenous territories accountable, as well as influencing the debate on the formulation of the new Regulation on deforestation-free products (FERC). In Brazil, APIB has historically mobilized the indigenous movement and faced the anti-indigenous policies that are being processed in the Federal Supreme Court and in the Chamber of Deputies, forming the front line of protection of Indigenous Peoples and Lands, and consequently, of the environment and the environment’s future.
Apib, as a national reference for the indigenous movement in Brazil, brings together regional indigenous organizations and was created with the purpose of strengthening the union of peoples, the articulation between the different regions and indigenous organizations in the country. To protect indigenous territories and ensure respect for constitutional rights, APIB resists and advances on different scales.

For more information and to schedule interviews, you can contact the press service: