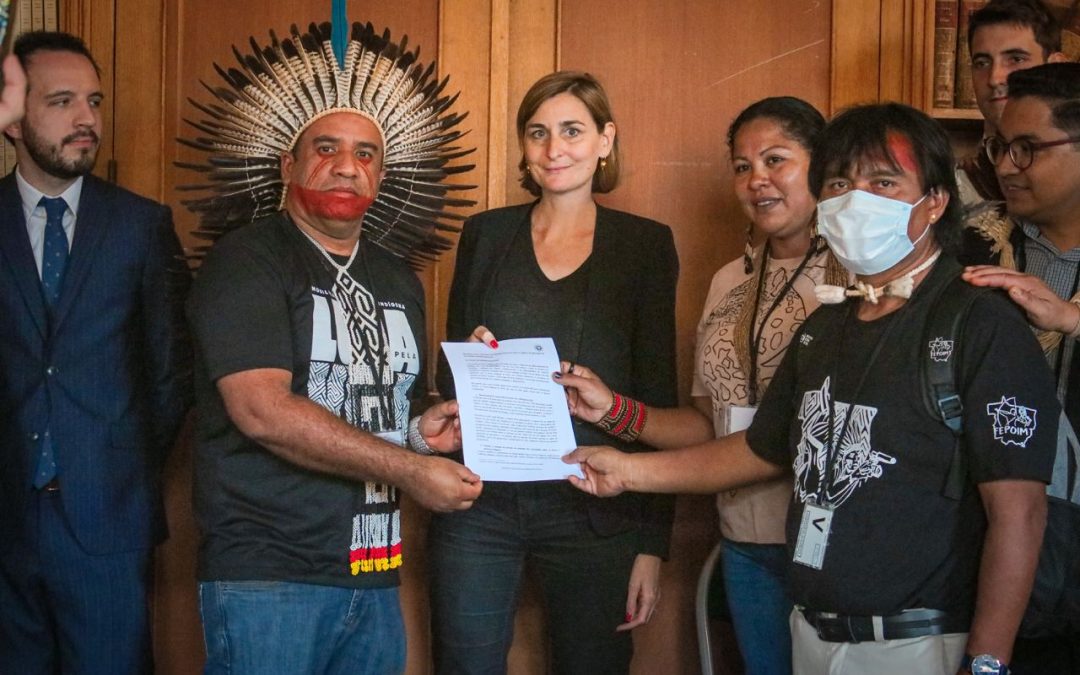 To the Minister of Foreign Affairs

The Articulation of Indigenous Peoples of Brazil (APIB) is aware of the debate on the Law on the Importation of Forest-Risk Products (FERC) and hereby reinforces and calls on the Ministry to recognize the reality of the multidimensional impacts and responsibility of European economic and commercial dynamics on indigenous lands in Brazil. The law under debate is of paramount importance for the Indigenous Peoples of Brazil, as it directly influences the promoters of human rights violations, the demarcation of indigenous lands and the maintenance of the biodiversity that the Peoples of Brazil have been protecting and safeguarding for millennia.

To ensure that the new law has an effective and timely positive impact on climate change, the Indigenous Peoples of Brazil, through APIB, call for attention to the following considerations:

The current definition of forests within the draft law, according to FAO, disregards much of the Brazilian indigenous reality, since it ignores other biomes beyond the Amazon and the Atlantic Forest. The Indigenous Peoples have been facing genocide and the disappearance of their peoples and lands for more than 500 years throughout the national territory, in such a way that it is necessary to recognise the historic struggle for the maintenance of the forests, and other natural vegetation existing in Brazil.

If the current definition were taken into account, the bill would apply to only 15% of the Pantanal region, one of the biomes most affected by fires in recent years, and completely disregards the Pampas biome in the south of the country, where historical processes of invasion and occupation of indigenous lands are taking place, mainly caused by the advance of soy and cattle breeding. The Cerrado biome, responsible for safeguarding Brazil’s aquifer reserves, would have only ¼ of its area recognised as forest within FAO’s definition, being today one of the regions with significant advance of agribusiness and cattle breeding, besides the expansion of the agricultural frontier in the MATOPIBA region , which already brings impacts for soil and water contamination due to excessive use of pesticides.

2. Impacts and threats of commodity pressure on Indigenous peoples and territories.

Originally protectors and maintainers of biodiversity, today Indigenous Peoples suffer various forms of violence, threats and impacts on their lives, bodies and territories. The specific ways of life of Indigenous Peoples are intrinsically linked to the maintenance of biodiversity, natural resources and the continuity of life.
Indigenous Land is a guarantee of the future for all humanity. The relationship with territory is not one of ownership, exploitation, expropriation or appropriation, but one of respect and management of a common good, which serves all humanity. However, this fundamental portion for the survival of indigenous peoples and for the common good remains under constant threat. The pressure for deforestation in indigenous territories is intense, through invasions, mining, agricultural expansion and other illegal activities that occur within the territories, putting at risk the lives of the peoples who live there.

Violence and violations of constitutional rights are constant. The Peoples that defend and inhabit the forests face not only deforestation, fires and destruction of their biodiversity, but also live with extreme situations of violence, racism and expropriation of their original territories on a daily basis.

In addition to the impacts directly caused by the advancement of commodity production (agribusiness and livestock products), such as soil and river contamination by pesticides sprayed into the air, the invasion of indigenous lands for illegal production, deforestation and sale of illegal timber, Indigenous Peoples face direct attacks on their peoples, communities, families and bodies.

The persecution of leaders, and even their assassination, is an unfortunate reality experienced by the original peoples. Those who stand up for the defence of nature, biodiversity and the maintenance of global life are persecuted, criminalised, imprisoned and assassinated, with the complete omission of the Brazilian State. And unfortunately this persecution and violence extends to supporters of the struggle of indigenous peoples, as in the recent case of the disappearance of the indigenous activist Bruno Pereira and correspondent journalist of The Guardian, Don Philips, who were denouncing the attacks suffered by indigenous peoples in the Vale do Javari region – the second largest indigenous land in Brazil (an area almost the size of Portugal).

The invasion of land, for the illegal production of commodities, leads to direct confrontation with the original communities, exponentially increases situations of gender-based violence and abuse of minors, as well as implanting dynamics of alcohol and drug abuse through the massive arrival of invaders occupied with tree felling, mining, and cattle production.

Although constitutionally recognised since 1988, the demarcation of indigenous lands has still not been concluded in Brazil. Indigenous lands that have not yet been ratified face strong pressure from economic dynamics, which take advantage of the omission of the Brazilian State to advance over areas protected by, and guaranteed for, the indigenous peoples. Currently, this gap makes these lands vulnerable not only to the production of commodities, but also opens the way for the presence of organised crime that operate drug trafficking as well as illegal logging. The presence of criminal factions also increases the pressure on indigenous youth, not infrequently enticing and recruiting young people for organised crime.

3. Brazil’s institutional weakness regarding the protection of indigenous lands.

Relying solely on national legislations and agencies does not provide security for Indigenous Peoples, who are currently witnessing the dismantling of public policies, regulations and protective institutions.
The Bolsonaro government was responsible for the destructuring of the policy of protection and monitoring of indigenous lands, from the extinction of public resources for protection agencies to the persecution and dismissal of professionals historically committed to the indigenous agenda.

Relying on the structure of defence and protection of Indigenous Peoples that exists today in Brazil leaves serious gaps for the effectiveness of European law.

From 2010 to 2020, the area occupied by mining within indigenous lands grew 495%, according to data from Map Biomas. This represents a 41-fold increase in deforestation caused by a practice that is illegal and violent to indigenous peoples and that the Brazilian congress, pressured by President Jair Bolsonaro, intends to legalise via Bill 191/2020.
Besides this bill that intends to open the indigenous areas to devastation of the forest and of lives, there is a whole package of destruction on the agenda of the National Congress that insists on the end of demarcations and the revision of Indigenous Lands (Bill 490/2007), that legalises the illegal occupation of public lands (Bill 510/2021), among others that make the legislative protection structure of indigenous territories and peoples more flexible.

Beyond the legislative threats, there is the president of Brazil himself, who has been fulfilling his role when he stated, while still campaigning in 2018, that he would not demarcate any millimetre of indigenous land. In his government, all demarcations are stalled and are at risk of being extinguished if the Temporal Framework Thesis (Marco Temporal) is judged in Brazil’s Supreme Court. The trial of the Temporal Framework is considered the trial of the century by indigenous peoples, as it defines the future of the demarcation of territories. If the Supreme Court decides in favour of this thesis, the right to territory and their protection may be extinguished. This bill is one of the main attacks by the Legislative Branch on the rights recognised to indigenous peoples in the CF/88. It is considered by APIB as an “attempt at genocide”. The main alteration of bill 490 would end up making the demarcation of indigenous lands unviable through the incorporation into law of the thesis of the temporal landmark, as one of the taxative requirements to be observed for the recognition of traditionally occupied areas. The trial, which began in 2021, was cancelled for its third time this year.

There is no solution to the climate crisis without Indigenous Peoples.
Climate change is more perceived by indigenous peoples because we have an intimate relationship with Mother Nature: all our sustenance comes from her and she gives us all the explanations for the phenomena that affect our lives. We understand her language. Looking at the sky, feeling the temperature, listening to the beat of the earth are things we learn from an early age, through indigenous education, which prepares us to manage the world, brings meaning to life. But everywhere we have gone we have heard personal perceptions regarding the imbalance in the climate.

Even in large urban centres many people are already noticing its effects on their daily lives.
The transformations are beginning to awaken everyone’s instincts. The Articulation of Indigenous Peoples of Brazil (Apib) is reinforcing to the world the centrality of peoples and their territories in confronting the climate crisis. We are watching governments and organisations seeking technological solutions and tools that can help the current crisis, but it is necessary to understand that the main social technology has already been developed by indigenous peoples: traditional territories and indigenous cultures.

The countries of the European Union, large buyers of commodities from Brazil, can help us protect our lives and our territories. Therefore, we are here in Europe and we demand strong and ambitious guidelines for FERC, such as: (1) ensuring that all biomes are included in the legislation; (2) that the inclusion of respect for the international rights of Indigenous Peoples is maintained, due to the fragility of national legislation and (3) that this law is brought to a vote as soon as possible in the European Parliament, because with each period of delay, the destruction of our lives and territories is accelerated

The approval of FERC, with strong and ambitious guidelines for the protection of our rights and biomes is urgent, so that a message is sent to the Brazilian government and to those who benefit from the attacks on Indigenous Peoples: Europe will no longer connive with violence against Indigenous Peoples. To guarantee their rights is to guarantee the life of humanity.