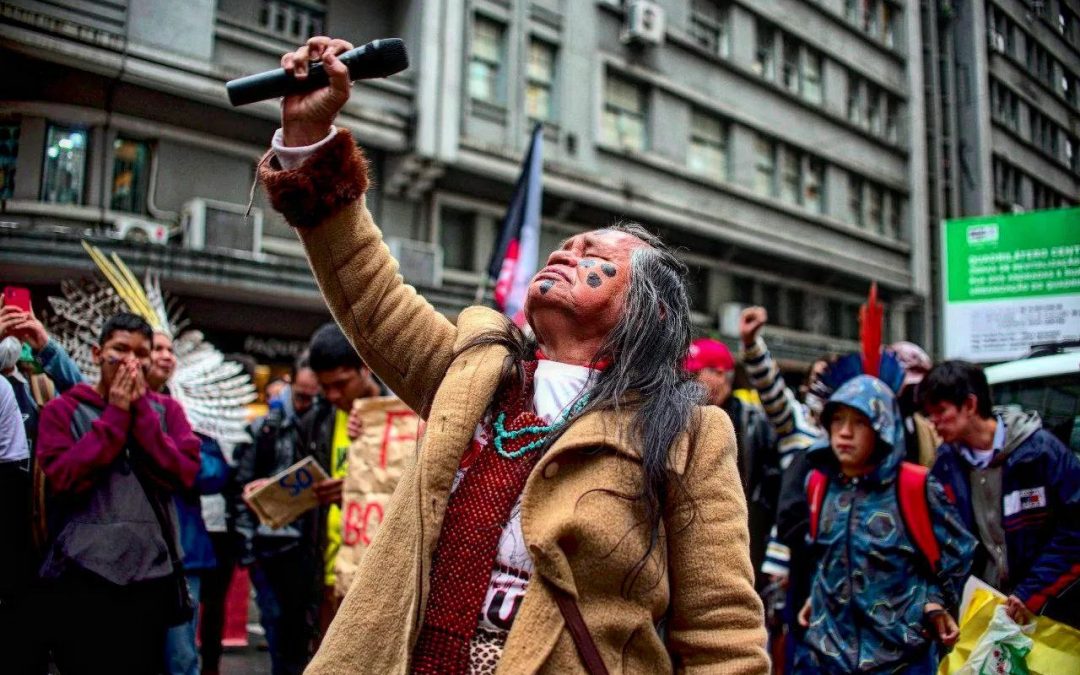 The voices of Brazil’s indigenous peoples echoed through the deepest corners of the country and in social networks on Thursday (23). The mobilizations called by Apib (Articulation of Indigenous Peoples of Brazil) marked the day when the Federal Supreme Court (STF) was supposed to vote on the thesis of the Milestone Thesis or Xokleng Case, a decision that will affect all indigenous territories in Brazil, however, the matter was postponed for the third time. “When we are faced with an authoritarian government, we expect courage from the Supreme Court to safeguard the fundamental rights of indigenous peoples,” demanded Eloy Terena, legal representative of Apib.

Also among the demands were justice for the murders of journalist Dom Philips and indigenist Bruno Pereira, and the exoneration of the president of the National Indigenous Foundation (FUNAI), Delegate Marcelo Xavier, for conducting an anti-indigenous policy at the head of the agency. In all, there were 39 actions, in all regions of Brazil, involving dozens of territories, including political acts and closures of roads, in addition to acts in 40 FUNAI headquarters carried out by the workers on strike. For Eloy, today’s actions “demonstrate categorically how much the indigenous peoples are victims of this genocide policy implemented through an anti-indigenous FUNAI. And how the delay in judging the Milestone Thesis is causing violence against indigenous peoples to increase”.

In São Paulo, hundreds of people showed solidarity with the cause by gathering with the indigenous people in front of the Art Museum of São Paulo (Masp) in the late afternoon. In Brasília, the mobilization took place in the Três Poderes square, in front of the STF, where sacred rituals were performed. Afterwards the documentary “Luta pela Terra”, made by young indigenous people, was released. The work brings together images and feelings in one of the most important moments of the struggle of indigenous peoples against the Milestone Thesis and the judgment of the Extraordinary Appeal 1.017.365, which deals with the demarcation of indigenous lands in the country.

In Brasilia, indigenous people from the Terena, Kaingang, Tuxá, Xokleng, Tupinambá, Karapó, Guarani Nhandeva, Guarani Kaiowá, Takaywrá, Cinta Larga, Karipuna, Tukano, Macuxi, Wapichana, Taurepang, Mura and Marubo peoples participated: with parliamentarians at the National Congress; at the National Human Rights Commission (CNDH); at the National Justice Council (CNJ); at the Supreme Court; at the National Indigenous Foundation (Funai); in addition to the “Seminar on the Constitutional Regime of Indigenous Lands in Brazil,” at the University of Brasília (UnB), which brought together indigenous people, partners, academics and jurists.

Under the command of a Bolsonarist delegate, Marcelo Xavier, Funai has completely stopped the land demarcation processes. Recently, during the searches for Bruno and Dom, the role of the foundation was restricted to defaming the indigenous organizations and accusing the indigenists of entering the territory of the Vale do Javari without authorization, which was not true.

In response to this, the foundation’s employees went on strike and joined the demonstrations today. Along with the Funai workers, Dinamam Tuxá, of the Apib coordination, condemned the practices of the institution. “Today FUNAI is under the power of large corporations, people linked to the armed forces who do not have the technical and scientific knowledge to conduct any kind of process related to indigenous policy. And the reflection of this is the criminalization of the indigenous movement, the persecution of the FUNAI staff, of those who have notorious knowledge about the subject, and the violence”.

About the Milestone Thesis

The milestone thesis intends to restrict the demarcation of indigenous lands only to those areas that were under the proven possession of the original peoples on October 5, 1988, date of the promulgation of the Federal Constitution. The thesis of indigenato, on the other hand, recognizes indigenous possession of the land as original, that is, prior to the creation of the Brazilian State itself. For the indigenous movement, it is fundamental that the Milestone Thesis be denied by the STF as soon as possible, because the proposal is an incentive for traffickers, gold miners, loggers and invaders of the territories.