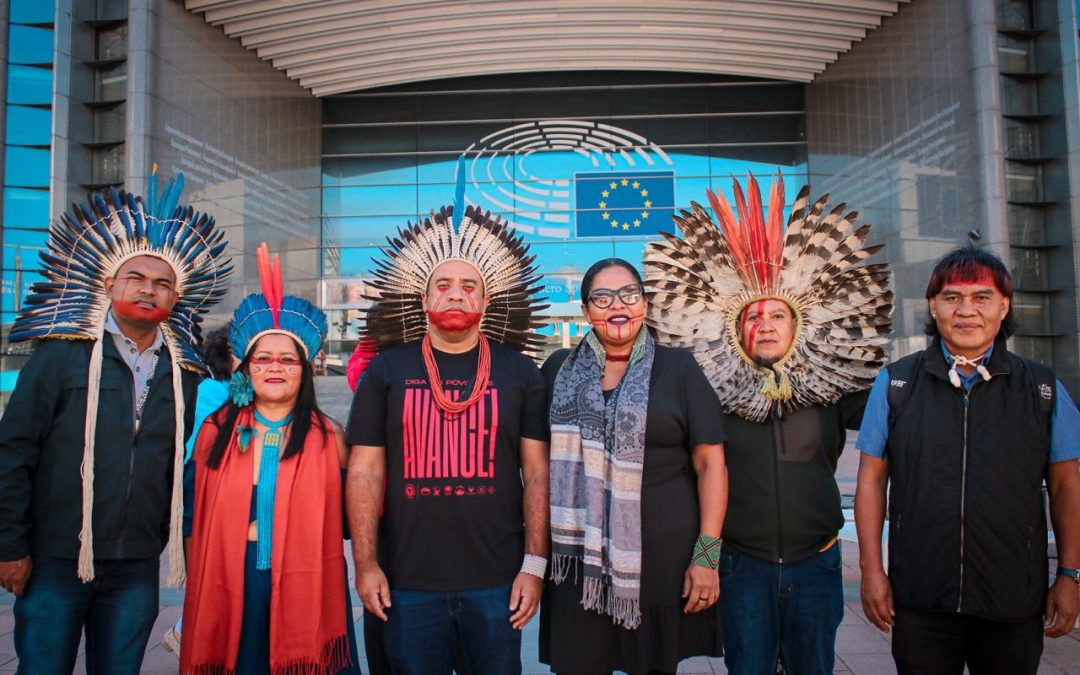 On September 13th, the European Parliament will vote on the Proposal for a regulation on deforestation-free products (FERC law), also called the Deforestation-free products law. APIB has been following the construction of the legislation since 2020 as it has some gaps that prevent from guaranteeing the effective protection of Indigenous Peoples against the pressure of commodity production.

The Articulation of Indigenous Peoples of Brazil (Apib) promotes a campaign to guarantee the rights of indigenous peoples in the FERC regulation, which will be voted on by the European Parliament on September 13th. With the campaign named “We are all ecosystems” (Somos Todos Biomas), the organization also seeks to include all Brazilian ecosystems in the new legislation.

The FERC law provides sanctions to minimize the risk of deforestation and forest degradation associated with products placed on the EU market. However, the definition of forest defined by FAO and considered by the legislation is very reduced and excludes a good part of biomes and natural areas, which would be left out of protection. Increasing the traceability of production chains only in some biomes announces a threat of displacement and intensification of commodity production in the unsupervised natural areas, which historically have already suffered such pressure.

In the case of Brazil, if the law is applied according to the current proposal, the Amazon forest would be the only biome with the largest protected forest area (84%) from the threats of illegal deforestation for the production of commodities, followed by the Atlantic Forest, Mata Atlántica, (71%). By contrast, only a small part of Cerrado (26%), Caatinga (10%), Pantanal (24%) and Pampas (11%) biomes would be considered as forest to be protected by Deforestation-free products law, according to data from MapBiomas.

The Indigenous Peoples of Brazil, which are distributed throughout all the country and located in all biomes, are already suffering today the pressure of commodity production through: 1) illegal invasion and deforestation of their lands; 2) violence, threats and killings of indigenous leaders and activists who struggle for environmental and indigenous rights; 3) socio-environmental pressure through deforestation, fires and the intensification of large-scale agricultural activities around Indigenous Lands with the use of pesticides that pollute lands and rivers.

According to a crossing data study carried out by APIB with the location of Indigenous Lands in Brazil and the IPAM database about the land-use changes in a buffer of 25 km distance around: 29% of the territory around the Indigenous Lands is deforested, while within indigenous borders there is only 2% of deforestation. The data also shows that most of the deforested areas around Indigenous territories are lands under permanent cattle pastures (producing meat and leather) and soybean production, but also sugarcane, rice or cotton stand out among other commodities.

As a result of the growing risk of environmental degradation caused by some productive sectors, the proposal for a regulation on deforestation-free products aims to minimize consumption of products coming from supply chains associated with deforestation or forest degradation, and increase EU demand for and trade in legal and ‘deforestation free’ commodities and products. This, in turn, is expected to reduce GHG emissions and global biodiversity loss.

Nevertheless, all biomes have the same importance in achieving an environmental balance and APIB requests, first of all, that all natural areas should be protected by this legislation.  We also demand respect for international treaties and agreements that protect human rights and indigenous rights, in particular, to provide a greater guarantee for the protection of the Indigenous Peoples of Brazil. In this regard, National legislations become insufficient when governments such as the current one of Jair Bolsonaro, with an openly anti-indigenist position, risk the lives of the guardians of the forests and biodiversity. Even with the pressure of globalization and commodities production, Indigenous Peoples struggle to continue living in an interrelationship of respect and sustainability with the forest. For this reason, APIB asks for the European Parliament to consider a more comprehensive deforestation-free products law that claims the protection of all types of vegetation and the world’s biodiversity, the survival of Indigenous Peoples and traditional populations, as well as the global climate balance to guarantee a good life for current and future generations.