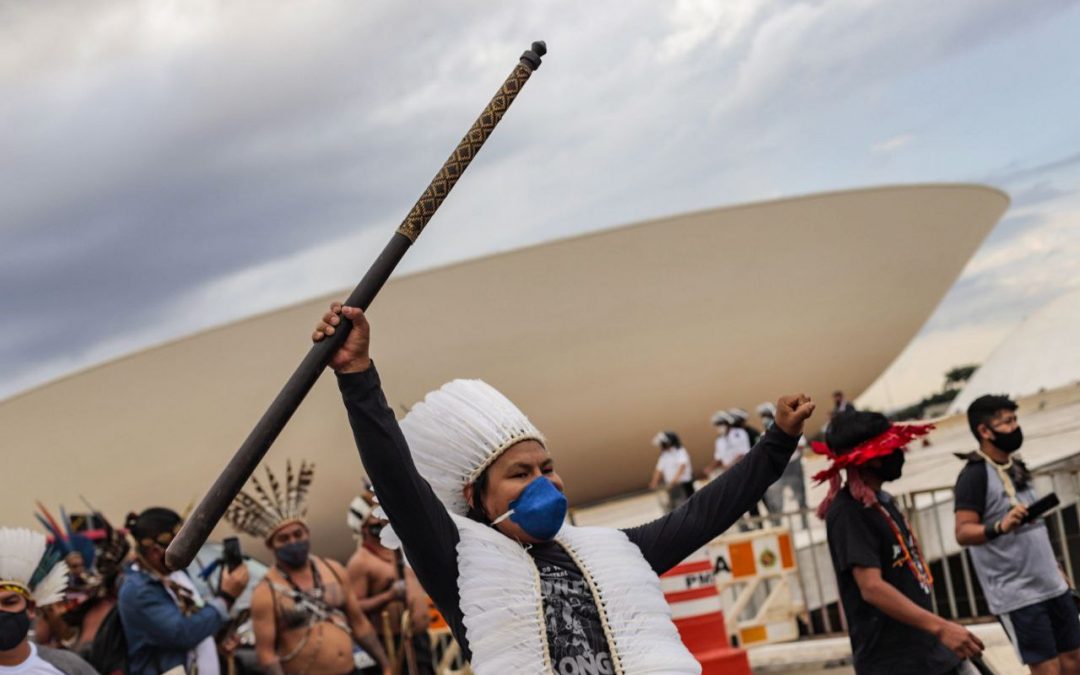 We, indigenous peoples, live in a state of constant threat, which requires us to be in constant vigilance and mobilization. Right now, June 2021, still under the restrictions of a devastating pandemic that is approaching the victimization of 500,000 Brazilians, of which 1,110 indigenous people are part of, we are forced to intensify our struggles and amplify our voice of protest to defend our most basic rights: our lives and our territories.

The fight for life called, and we came to Brasília to set up our Rise for the Earth camp in defense of our rights, most importantly, territorial. We returned to occupy the grounds of the federal capital after two years without in-person mobilizations, especially the Acampamento Terra Livre (largest assembly of indigenous peoples in Brazil, which, due to the Covid-19 pandemic, was held virtually in 2020 and 2021).

Our leaders, who are already fully immunized with the vaccine against the new coronavirus, gather at this moment to echo our maracas and reaffirm that, in the midst of the greatest health and humanitarian emergency in recent years, Indigenous Lives Matter.

In this manifesto, we reaffirm our banners of struggle and decree our PERMANENT STATE OF MOBILIZATION.

FOR THE IMMEDIATE INTERRUPTION OF ANY ANTI-INDIGENOUS MEASURES AT THE NATIONAL CONGRESS!

1. Final withdrawal from the CCJC voting agenda and shelving of Law Reform Process (Bill) 490/2007, which threatens to nullify the demarcations of indigenous lands;

2. Shelving of 2633/2020 Bill, known as Land Grabbing bill. If approved, the project will give amnesty to land grabbers and legalize land theft, further aggravating violence against indigenous peoples;

3. Shelving of 984/2019 Bill, which intends to build roads through the Iguaçu National Park and other Conservation Units;

4. Shelving of 177/2021 Bill, which authorizes the President of the Republic to abandon Convention 169 of the International Labor Organization (ILO), the only international treaty ratified by Brazil that specifically and comprehensively addresses the rights of indigenous peoples;

5. Shelving of 191/2020 Bill that authorizes the exploration of indigenous lands by large infrastructure and industrial mining projects;

6. Shelving of 3729/2004 Bill, which destroys the environmental licensing and brings major setbacks for the protection of the environment and for guaranteeing the rights of populations affected by the environmental degradation of infrastructure projects, such as hydroelectric plants.

These genocidal and ecocidal projects use the Covid-19 pandemic as a smokescreen, increasing violence against indigenous peoples and conflicts in our territories, including among indigenous people. These conflicts are fueled by the Government with the objective of dividing, weakening and demobilizing our peoples, organizations and leaders. Be aware that we will not let this strategy overwhelm us!

FEDERAL SUPREME COURT (STF): OUR RIGHTS MUST BE GUARDED AND PROTECTED!
The Brazilian Constitutional Court debates a case of general repercussion on the demarcation of indigenous lands, the well-known Extraordinary Appeal (RE) 1,017,365 related to the case of the Xokleng-La Klanõ Indigenous Land, belonging to the Xokleng people, in Santa Catarina state. The status of “general repercussion” given by the STF to the case means that its resolution will serve as a guideline for the federal government and all instances of the Judiciary regarding the demarcation of indigenous lands, in addition to serving to guide legislative proposals that address rights of original peoples – such as bill 490, which opens indigenous lands to predatory exploitation and makes new demarcations impossible in practice.

This process has been suspended due to the intervention of Minister Alexandre Moraes. The STF has a duty to protect our constitutional right to our territories! The trial must be resumed!

Especially in this moment of attacks, the voice of the Supreme Court needs to echo strongly and guarantee to the Yanomami and Munduruku peoples the removal of invaders from their lands. This same protection should be extended to five other Indigenous Lands (TIs), also discussed at the STF: TIs Karipuna and Uru-Eu-Wau-Wau, in Rondônia, TIs Kayapó and Trincheira-Bacajá, in Pará and TI Araribóia, in Maranhão.

This is what Apib is demanding at this time, with a proper sense of urgency, from the ministers of the Supreme Court. We do this through this document, through the voices of our leaders, from our territories throughout Brazil, and also concentrated in the Rise for the Earth camp in Brasília. We also do it in court, within the scope of the Action for Non-compliance with Fundamental Precepts (ADPF) 709/2020, authored by Apib and several national institutions in solidarity with indigenous peoples. The ADPF 709/2020 is on the agenda of the STF, and must be debated by the plenary until June 18th.

For the life and historical continuity of our peoples, tell the people to move forward!