With manifestations of the UN and OAS against the Milestone thesis, indigenous peoples receive international support 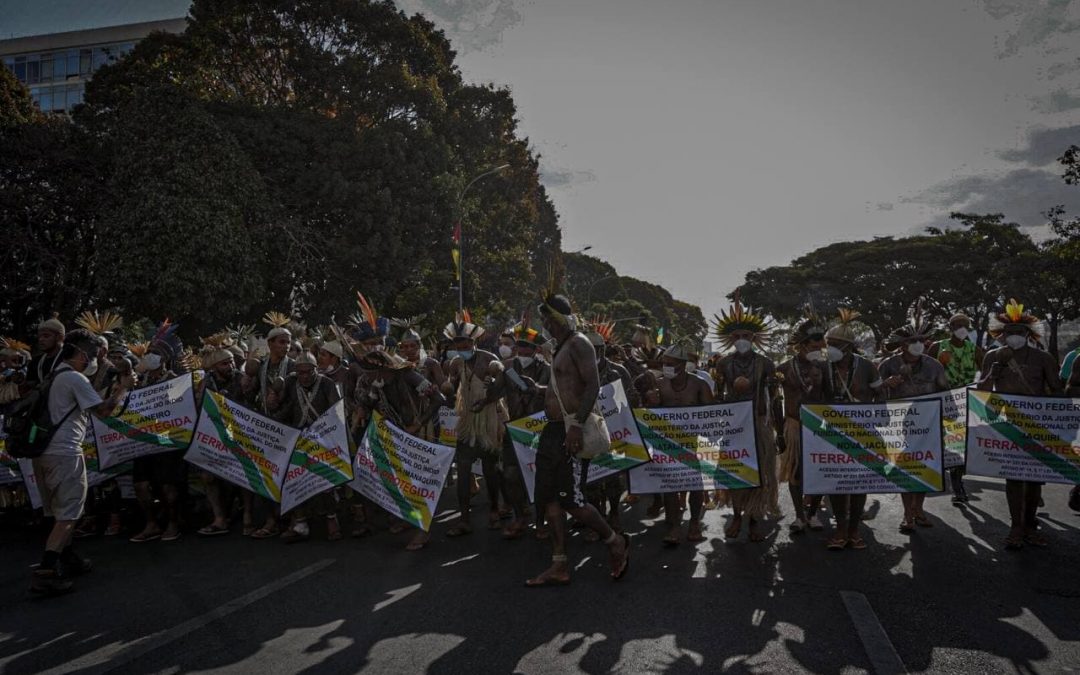 The international community demands from Brazilian institutions respect for the rights of indigenous peoples and rejects the Milestone thesis, which will be judged by the Supreme Federal Court (STF)

The struggle of the indigenous peoples of Brazil for the respect of their lives and territories has gained relevant international support every day. The Articulation of the Indigenous Peoples of Brazil (Apib) understands the importance of seeking the attention of the world and occupying all possible instances to guarantee respect for their rights, especially in a domestic conjuncture in which Brazilian institutions, which should look after the welfare and guarantee of indigenous peoples rights, are converted into threatening spaces.

Since the beginning of the Bolsonaro government, the attitude of the Brazilian State towards the indigenous peoples has become a policy of death and destruction. The hard-won public policies have been hastily discontinued, indigenous institutions, such as FUNAI, have been politically occupied and their institutional objectives have been distorted. The State has systematically omitted its constitutional duties to protect indigenous peoples, when it has not revealed itself to be an enemy.

In this scenario, international support is even more relevant. The support of partners, international agencies and multilateral bodies draws the attention of the global community to the scenario of constant threats and violence that the indigenous peoples live through in Brazil. Far beyond mobilising international solidarity, however, this movement also provokes Brazilian institutions to move in defence of the native peoples.

Thus, Apib and its regional organisations have received with great satisfaction the support of various international institutions in recent days, especially after the start of the Struggle for Life camp in Brasilia. “We are carrying out the biggest mobilisation of our lives, in Brasilia, because it is our future and that of all humanity that is at stake. Speaking of the demarcation of indigenous lands in Brazil is to speak of guaranteeing the future of the planet with solutions to the climate crisis,” reinforces Sonia Guajajara, executive coordinator of Apib.

On the first day of the mobilisation, the coordination of Apib and representatives of the Yanomami and Munduruku peoples were visited by the Progressive International, an international network of NGOs, political parties, trade unions and other institutions fighting for human rights, in a demonstration of international support. The committee received copies of the International Complaints Dossier launched by APIB last week, as a tool to denounce the anti-indigenous agenda that takes over Brazilian institutions under the Bolsonaro government. 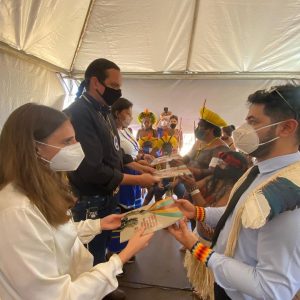 In the coming days, representatives of APIB have an intense agenda of meetings with embassies and diplomatic representations in Brasilia, occasions in which they will present the International Complaints Dossier and dialogue about the necessary support of foreign states to stop the anti-indigenous agenda advancing in Brazil. The meetings began yesterday, with a visit to the Norwegian Embassy, where they were received by Ambassador Nils Martin Gunneng and programme officer Kristian Bengston. This morning, they were received by the French Ambassador, Brigitte Collet.

UN and OAS reinforce the fight against the Milestone thesis

Yesterday (23), the Inter-American Commission on Human Rights (IACHR), an organ of the Organization of American States (OAS), and the UN Special Rapporteur on the rights of indigenous peoples, Francisco Cali Tzay, spoke out against the Milestone thesis, which is being debated by the Federal Supreme Court (STF) within the scope of Extraordinary Appeal (RE) 1.017.365.

The RE deals with a repossession action filed by the state of Santa Catarina against the Xokleng people, regarding the Ibirama-Laklãnõ Indigenous Land (IT), where Guarani and Kaingang indigenous people also live. In 2019, the STF gave “general repercussion” status to the case, which means that the decision made in this case will serve as a guideline for the federal management and all the Justice instances with regard to demarcation procedures. The trial, therefore, will affect the future of all indigenous territories in Brazil.

The UN Rapporteur asked the Supreme Court (STF) to guarantee the rights of indigenous peoples to their lands and territories, and to reject a legal argument promoted by commercial agents in order to exploit natural resources on traditional indigenous lands, referring to the Milestone thesis.

“If the STF accepts the so-called Milestone thesis in its decision on land demarcation later this month, it could legitimize violence against indigenous peoples and intensify conflicts in the Amazon forest and other areas,” said the Rapporteur.

The IACHR expressed its concern over the legal thesis of the “Milestone thesis” and warned that it could have serious effects on the collective property rights of indigenous and tribal peoples in Brazil.

The manifestation published yesterday on the IACHR website addresses in particular the STF requesting the Court to “adopt the necessary measures to review and modify the provisions of the judicial orders or directives, such as the “Milestone thesis”, which are incompatible with the parameters and international obligations regarding the human rights of indigenous and tribal peoples”.

For the OAS body, the application of the Milestone thesis “contradicts international and inter-American human rights standards, in particular the American Convention on Human Rights and the American Declaration on the Rights of Indigenous Peoples. In particular, because it does not take into consideration the countless cases in which indigenous peoples were forcibly displaced from their territories, often with extreme violence, which is why they were not occupying their territories in 1988.”