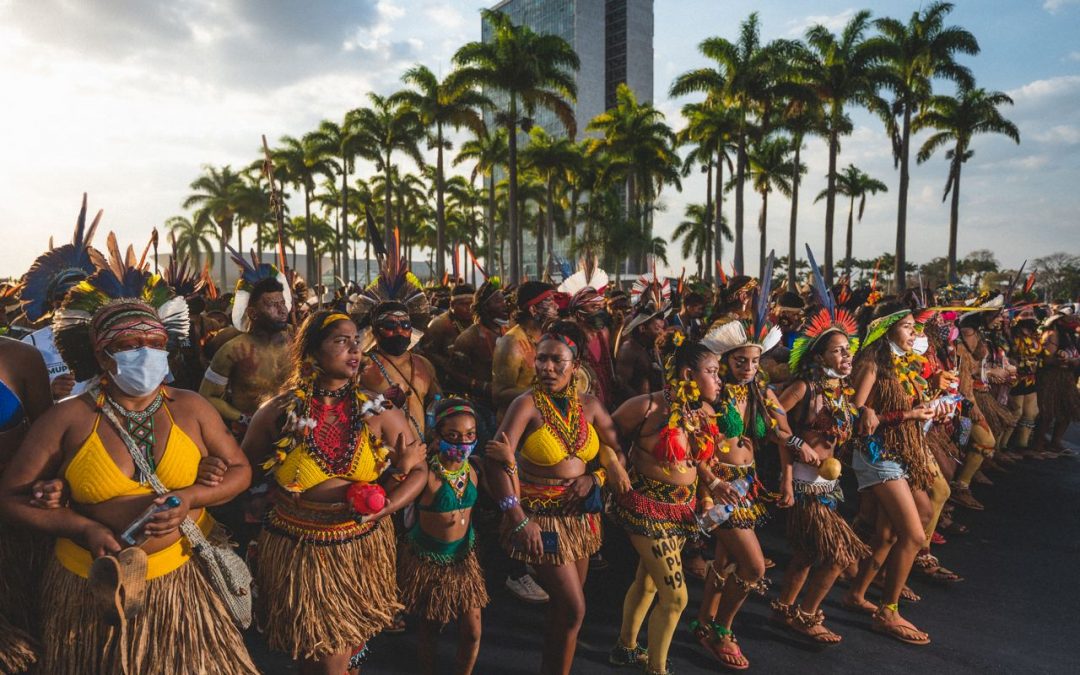 ​​In memory of our ancestors, who gave us their lives so we can exist. In memory of the ‘encantados’ (enchanted spirits) who brought us here to continue their struggle in defense of our bodies, lands and territories, our identity and differentiated cultures, we communicate Brazilian and international societies that we will remain permanently mobilized in defense of LIFE and DEMOCRACY.

Our fight is not just to preserve the lives of our peoples but of the entire humanity, today seriously threatened by the policy of extermination and devastation of Mother Nature promoted by economic elites – who inherited the greed of colonial, mercantile and feudal expansionist power – and by governors like the genocidal Jair Bolsonaro.

The Articulation of Indigenous Peoples of Brazil (Apib) started the Struggle for Life camp in Brasília on August 22nd and reinforces in this letter that we will remain mobilized until September 2nd, 2021 to fight for our rights. Today, this is the greatest mobilization in the history of the original peoples, in the Federal Capital, and it reinforces our statement: our history does not begin in 1988!

Even putting our lives at risk, in the still seriously dangerous context of Covid19, we are here to tell the invaders of our territories that they will not pass, despite the intense attacks on our fundamental rights guaranteed by the Federal Constitution of 1988.

We occupied the media, the streets, the villages and Brasília to fight for democracy, against the racist and anti-indigenous agenda that is being implemented by the Federal Government and the National Congress and to monitor the judgment in the Supreme Court (STF), which will define the future of our peoples.

During the month of June 2021, we carried out the Rise for the Earth, inaugurating our first on-site activities (after the pandemic), in Brasília, to face the worsening of violence against indigenous lives. From then on, we started a new cycle of struggles, considering that, since March 2020, we only gathered virtually and within our territories, due to the pandemic.

As we face many viruses, including Bolsonaro’s genocidal policy, we started our ‘Indigenous Spring’ that intends to occupy Brasília constantly, in 2021, in addition to continuing on social networks and in mobilized territories.

From the 7th to the 11th of September, indigenous women will be on the front line to bury once and for all the Milestone thesis, during the Second March of Indigenous Women: the original women reforesting minds for the healing of the Earth.

On the 26th, the STF began the judgment that will define the demarcation of Indigenous Lands (TIs). With no end in sight, the indigenous peoples are still mobilized to monitor the outcome of the votes of the Justices of the Supreme Court.

We will fight to the end to maintain our original right to the lands that we traditionally occupy and protect. Being part of this country, maintaining our condition as culturally differentiated peoples, even if public authorities and private corporations consider us obstacles to development. This development, which since the beginnings of the European invasion has been devastating, ethnocidal, genocidal and ecocidal, and which in current times has found, and not by chance, in this misgovernment, a prototype to perpetuate its project of domination.

We are children of the Earth! And the Earth is not ours, we are the ones who are part of it. It is the uterus that generates us and the arms that welcomes us. That’s why we give her our life! In our tradition there has never been this issue of regulating who owns the land or not, as our relationship with it was never of possession. Our possession is collective as it is the usufruct. This is the basic foundation of our existence, which is not yet understood by the ignorance of the so-called Western civilization culture, even after 521 years.

This contradiction is at the base of the disputes that the invaders’ heirs or descendants insist on keeping against us. They relentlessly dispute our territories without truce, during the different phases of the formation and configuration of the Brazilian National State and nowadays!

Neocolonial elites, also promoters and beneficiaries of the military dictatorship, took over most of the current National Congress and continue to defend the continuity of their hegemonic control, domination over bodies, lands and territories and not just indigenous peoples. They intend to make us believe that they are going to bring development to Brazil, when, in fact, they are promoting a Project for the Death of Mother Nature – of forests, rivers, biodiversity – and for the peoples and cultures holding millenary accumulated wisdom, outside the scientific institutions. According to the most recent data from the UN Panel on Climate Change, there is an undeniable increase in the planet’s temperature, floods, among other environmental disasters, obviously caused by this development model.

Considering all this factors, we say NO to any and all initiatives that ignore our historic and strategic protection of life, humanity and the planet. We also say NO to all those who propose to violate our rights through hundreds of administrative, legal, legislative and legal actions.

Our history did not begin in 1988, and our struggles are millennial, in other words, they have persisted since the Portuguese and successive European invaders arrived in these lands to take over our territories and their wealths. That is why we will continue to resist, claiming respect for our way of seeing, being, thinking, feeling and acting in the world.

Under the aegis of the Constitutional text, we trust that the Supreme Court will reinforce our original right to land, which does not depend on a specific date of occupation proof, as defended by the invaders. Through the Milestone thesis, the current colonizers want to ignore that we were already here when their ascendants decimated many of our ancestors, raising the current national state over their corpses.

Supported by our ancestry and the power of our peoples, our spirituality and the strength of our enchanted spirits who cherish the Bem Viver (Good Living), ours and humanity’s, we say no to the Milestone thesis! We call the national and international societies, especially the different organizations and social movements that have always been with us, and above it all, our bases, peoples and indigenous organizations to remain vigilant and mobilized in defense of our rights.