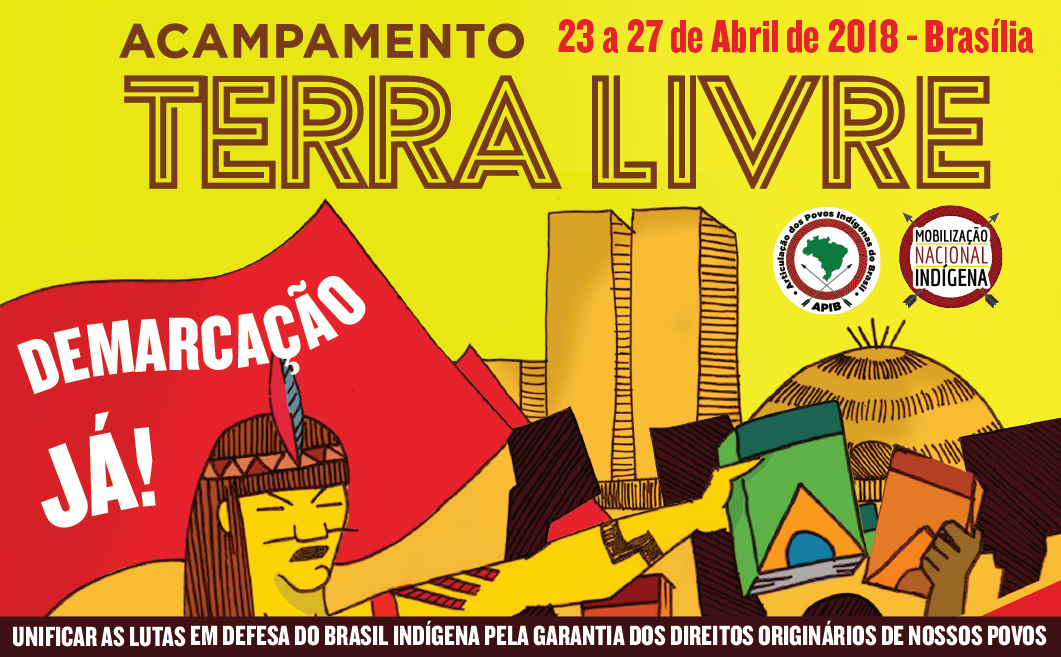 Never like today, on the last 30 years, the brazilian State chose a relation completely adverse to the rights of indigenous people. The illegitimate government of Michel Temer reportedly took an anti-indigenous policy putting end to the indigenous lands demarcations and protections, leading to the invasion of these lands by governmental and private enterprises. Prompted the dismantle of institutions and public policies to the indigenous people and is being absent and conniving with the discrimination and violence practices of all order against the indigenous peoples and communities even in already regularized territories. Administrative and legal measures are adopted to restrain indigenous rights. Stand out among these, besides the distinct reforms (labor, social security, privatization of state-owned enterprises etc.) that reaches all the brazilian population, freezing public budget for 20 years, through the Constitutional Amendment 95, involving the already reduced budget of the indigenist organ. The General Union Law, on the coupist government service, institutes  the Opinion 001 / 17, that intends to generalize to all indigenous lands the conditions defined by the Supreme Court exclusively to Raposa do Sol indigenous land and wanting to consolidate time frame thesis that refers to the recognition of indigenous territorial right to the Federal Constitution promulgation , in October 5, 1988.

Convergent with this policy, distinguished anti-indigenous stands, mostly the ones from agribusiness, religious fundamentalism and mining, among others, move around dozens of Constitutional Amendment Projects (PECs) like PEC 215 and Law Projects (PLs) to regress or suppress indigenous rights assured by the Federal Constitution, with the purpose to legalize invasion and usurpation of indigenous territories to natural goods (soil, forests, water, mineral, resources, biodiversity) illegal exploitation and the implantation of infrastructure enterprises (ports, hydroelectric, roads, transmission lines) besides the expansion of agricultural frontiers and the usurpation of traditional knowledges. Also part of this offensive of capital and its national partners are the practices of co-optation of indigenous leaders, the internal division of indigenous peoples and communities, judicial and extrajudicial evictions, intimidation, persecution and murder of indigenous leaderships.

Lastly, in the judicial sphere, worries the growing consolidation and applicability,  mostly in inferior stances, of time lapse thesis, the lack of access of indigenous people to justice and frequent repossessions, in favour of invaders , the extrajudicial evictions, when indigenous peoples decide to retake their traditional territories.

In face of this barbarism scene. that reaches not only the indigenous people, Indigenous Peoples of Brazil’s Articulation (APIB) summon the indigenous peoples and organizations from all regions of the country to the biggest indigenous national mobilization of the year – the Acampamento Terra Livre – ATL (Free Land Camp) which will be held in Brasília – DF, in the period from April 23 to 27, 2018, with the objective of: “Unify the struggles in defense of Indigenous Brazil – for the guarantee of the original rights of our peoples”.

The ATL provides for discussing and defining positions about the situation of fundamental rights of our peoples within the scope of the different State powers, mostly the territorial (demarcation, protection and sustainability) and about the specific and differentiated public policies conquered in recent years (health, education, PNGATI, CNPI, etc.) as well as on the increasing climate of criminalization, violence and institutional racism against our indigenous peoples, communities and leaderships. This will involve mobilizing and demonstrating with the organs and instances of the public authorities involved in principle with the protection and promotion of the rights of indigenous peoples and the implementation of the public policies that concern us.

The APIB will make available the conditions of logistics, infrastructure and feeding to welcome the delegations, it is therefore up to the local and regional indigenous associations, communities and organizations to seek with their supporters and partners network transportation facilities to travel to Brasília. Each participant cannot forget to bring their personal use materials (toothpaste, soap, toothbrush, plate, glass, cutlery, mattress and sweaters) and, who can, lodging material (tents, canvas, blankets, sleeping bags, nets, mosquito nets, etc.) and contribute with feeding material  and non-perishable hygiene.

The delegations will be received starting monday morning, April 23, on the Camping site  to be informed in a different moment, when we will start the installation. the mobilization activities will happen during 4 intense days, from April 23rd to 26th, leaving to return to the territories on the 27th.

We recommend to the delegations coordinators to orient the leaderships about the safety rules and the need to be fully involved at the foreseen activities.

To further informations, please contact Apib representation in Brasília, through the e-mail apibbsb@gmail.com or by phone (+55 61) 30345548.