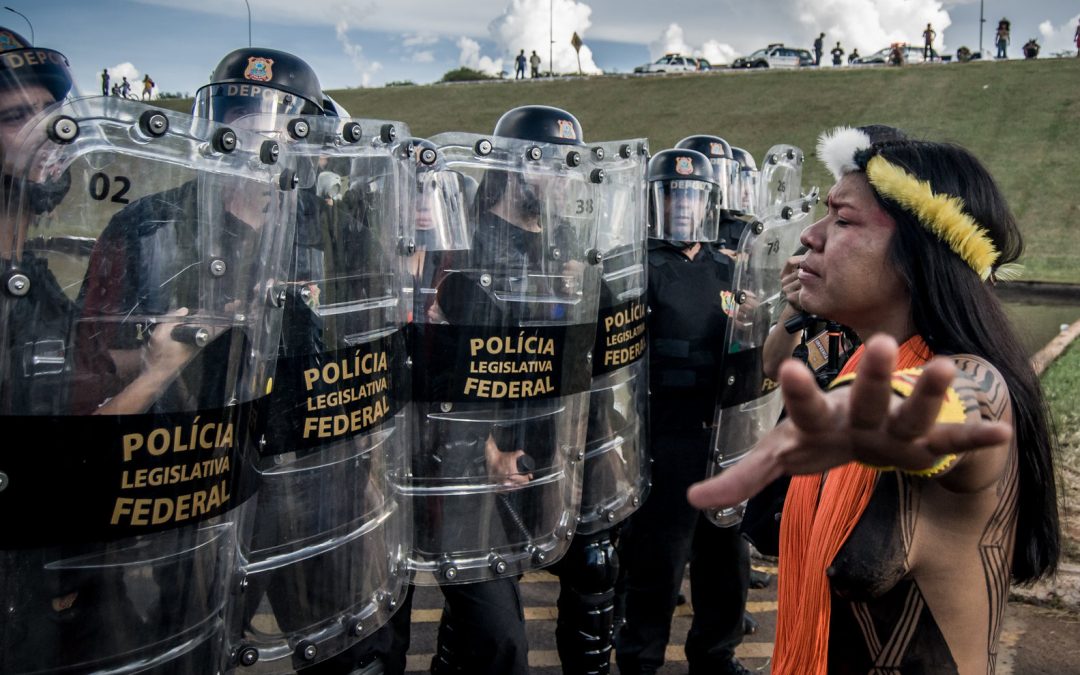 Following the intention to exterminate the indigenous peoples of Brazil, the Jair Bolsonaro government intensifies his position when it was still a federal deputy, when he stated on April 15, 1998, that “the Brazilian cavalry was very incompetent. Competent, yes, it was the American cavalry that decimated its Indians in the past and nowadays does not have that problem in their country. ”

This morning we received the news that his minister Sérgio Moro published the Ordinance n. 441 which authorizes the use of national security force in the esplanade of the ministries and in the place of the three powers during the next 33 days. This measure was encouraged by the Institutional Security Office (GSI) and has as one of the motivators the Free LanD Camp(ATL), which will take place in Brasília from the 24th to 26th of April. It is not excessive to mention that Decree 5289/2004, which bases the aforementioned decree, provides as an action to be developed by the National Security Force, with the support of civil servants, the exact opposite of what is intended with the use of force, that is , to support actions aimed at the protection of individuals, groups and organs of society that promote and protect human rights and fundamental freedoms.

The Free Land Camp is a meeting of national and international indigenous leaders that seeks to exchange cultural experiences and the struggle for the guarantee of our constitutional rights, such as the demarcation of their territories, access to health, education and indigenous social participation. The Camp has been going on for more than 15 years always in a peaceful character, seeking to give visibility to Indigenous peoples daily struggles, always made invisible by the authorities. If it is in the interests of General Augusto Heleno to discourage the use of violence against the native indians, why can’t he stand for the people that is been suffering violence and having their families and relatives killed for over 500 years?

“What are you afraid of? Why do they deny us the right to be in this place? Why do they insist on denying our existence? In binding us to interests other than ours? In speaking for us and lying about us?”

The camp is not financed with public money as President Jair Bolsonaro said, he is self-financed with the help of several collaborators and only happens because of the sweat of so many that make it happen.

Unfortunately the government is not willing to listen to them and does not help with anything, which to our understanding should be its role. It is necessary to end the binge with the public money and this will not be done with the shutting down of the minimum salary, or cuts in health and education. It can only be done with the end of corruption, the checks, the fakes job titles or so many other scandals we see in this government.

“Stop inciting that the people are against us! We are not violent, violent is those who attack the sacred right to free demonstration with armed troops, the right to come and go from so many Brazilians who have walked and walked these lands since much before 1500.”

The history of our existence is the history of the tragedy of this model of civilization endorsed by the present government that puts profit on top of life, we are the living resistance, and in the last 519 years we have never cowered before the armed men who wanted tell us what our place was, now it will be no different. We will continue to march, with the strength of our ancestral culture, being the resistance to all these attacks that we are suffering.

Tell the peoples we will move!